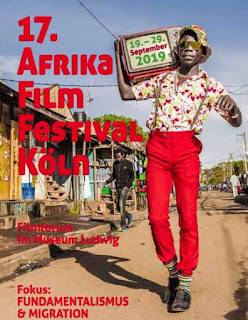 Hawa Essuman, 2019 Festival patron:
"There’s a rediscovery of heritage on the continent and with that comes a shift in the relationship with Africa and Europe although not in a way that either side considered. Navigating this new space is delicate. A lot of thought is being given to what this looks like and what the ramifications are when put in the perspective of the shared histories that were never balanced. Is it now, despite the verbal will?"

The 17th Afrika Film Festival Köln: 75 films and 30 guests from 23 African countries and the diaspora. Ouagadougou, Tunis, Durban, Zanzibar, Tarifa, Rotterdam and Berlin – those are the international festivals that FilmInitiativ employees attended to compile the selection of films for Cologne. Along the way they discovered new masterpieces by old friends, and invited a number of young up-and-coming filmmakers to Cologne. Then there was all the online research done all over the world and the countless films that were personally submitted to FilmInitiativ by African directors. From this huge pool of material they watched hundreds of films, and 75 features, documentaries and shorts from 23 African countries, Brazil, the US and Europe made the final selection. The programme not only gives a geographical overview of where films are currently being made across Africa, but also the kind of subject matter being tackled in Africa and the diaspora. Engaged independent filmmakers and writers continue to shape the African cinematic landscape with ambitious films that uncover hidden (hi)stories, rail against social grievances, reflect urban life and document exciting artistic activity. What’s striking is how imaginative, brave and radical filmmakers in Africa are when it comes to addressing fundamentalist movements of all shades.