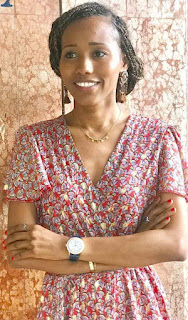 Wednesday, July 17 was dedicated to women at the Ecrans Noirs Festival, [Culturebene] met with the young Chadian filmmaker Aché Coelo, who was part of the panel, and is the director of N'djamena Festival.

Culturebene: You are an important player in the 7th art of Chad, can you tells u about the festival of N'Djamena?

Aché Coelo: It is festival of short films, which was launched last year. Born in a context of need and of the expectation in terms of both Chad and Africa where we see that more and more young people and women do not have the facility to be able to create and redistribute their projects.

To date how many film productions do you have?

I produce only short films through the auspices of the Chadian association of mixed culture of which I am president and that sponsors the short film festival. This year we created this innovative project whose aim is to begin a training structure and produce short films, so at the present there are only two.

For you, what role should women play in cinema?

The representation of the woman must be deconstructed, less she be confined to small roles; I would like to see a woman "superwoman". In terms of Africa, we must talk about the woman without tarnishing her image; we must put the woman at the forefront while preserving themes related to the so-called values of society.

What place does women occupy in Chadian cinema?

The Chadian filmmaker has not been able to grow fully. We have no funding, but there is a lot of work that has been done since the past five years. And there are more and more young women: the proof is that I am here, and there are other women like the director Carine K, who is one of the young people we produced. There is Maryam Wanou who is a young actress. More and more of these women are beginning to make themselves known, they are asserting themselves on the local level, which is a good start.

What are your thoughts about Ecrans Noirs?