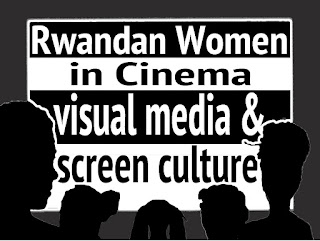 African filmmakers aim to appropriate the images, techniques and the media in which they work, in the sense of a subjective representation of the social realities that surround them.

Digital technology facilitates this appropriation process in the creation of a self-image, in the sense that the general media adaptability that it engenders reinforces the expression of new subjectivities and contributes to the archiving of daily life.

Judging from the handful of Rwandan women in cinema who are becoming increasingly visible, using new technologies provides the means to reflect the realities of their societies. For example, Rwandan-German Amelia Umuhire’s Polyglot webseries examines the double-cultured identities of young afrodescendants in Berlin. Similarly, Claudine Ndimbira Shenge launched the “She&He” web series Indiegogo crowdfunding campaign to raise funds for the She&He documentary web series focusing on LGBT in Rwanda. And another example of this ever-expanding phenomenon, using raw iPhone footage, U.S.-based Franco-Rwandan Anisia Uzeyman, creates a love story of a couple journeying across the United States.


The URUSARO International Women Film Festival was launched in 2015. The website presents the history of the festival as follows:

CinéFEMMES RWANDA is a non-profit organisation which promotes independent filmmaking by focusing on Rwandan female filmmakers through training, advocacy, networking and supporting their productions.

In November 2012, a group of Rwandan women filmmakers discussed their profession and realised that many Rwandan females have plenty of interesting film project ideas, but these were kept in cupboards because of limited self-confidence, lack of experience and opportunities and means to venture in the filmmaking industry. they finally decided to put their individual resources together by creating CinéFEMMES RWANDA to promote talents and interests of Rwandan females in filmmaking.

Following is a growing list of Rwanda women in cinema, visual media and screen culture, who work in Rwanda and its diaspora:

Below is an annotated list with links of relevant documentation regarding Rwandan women in cinema, visual media and screen culture.

FESPACO 2019: Icyasha (Etiquette) by/de Marie Clémentine Dusabejambo (Rwanda)
A 12-year-old boy tries desperately hard to join a local boys' football team. His effeminacy disqualifies him. The boys often taunt him and bully him. He finds himself in a world where he must prove and claim his masculinity. The story shows the simultaneous pain and beauty of childhood.

Claudine Ndimbira : Support her film project “Living like a shadow” about the LGBTQ community in Rwanda. Claudine Ndimbira had this to say about the film project: With this project “Living like a shadow” I want to give the voice to LGBTQ community members in Rwanda to tell their stories, what they have been through, what they wish their lives could be but also to the society so that they say what is the reason why they think being gay is a problem to them. See: https://africanwomenincinema.blogspot.com/2018/12/claudine-ndimbira-support-her-film.html

Jacqueline Kalimunda : Love in Rwanda | De l'amour au Rwanda – TV5 MONDE +. Love in Rwanda. Claudine, a businesswoman, navigates between several jobs in order to construct a life independent of men. Neza, who is the younger of the two, dreams of the ideal man. Between these two experiences are the desires and disappointments of women in Rwanda. See http://africanwomenincinema.blogspot.fr/2017/02/jacqueline-kalimunda-love-in-rwanda-de.html

Single Rwandan / Celib Rwandais by/de Jacqueline Kalimunda analyse/analysis by/par Viviane Azarian. Translation of analysis from French. While 2014 revived the international media interest in Rwanda, 20 years after the genocide of the country’s Tutsi population, filmmaker Jacqueline Kalimunda prepares for the 2015 release of a documentary, book, and web platform on "love in Rwanda". In a country where hatred reached the paroxysm of horror in 1994, a subject theoretically “ordinary" is nonetheless a profound inquiry. http://africanwomenincinema.blogspot.fr/2015/06/single-rwandan-celib-rwandais-byde.html

OTHER LINKS OF INTEREST REGARDING RWANDAN WOMEN IN CINEMA

Filmmaker Ndimbira recounts her journey into film writing. In an interview with Moses Opobo Claudeine Ndimbira Shenge talks about her evolution into filmmaking. 03 January 2016.
http://www.newtimes.co.rw/section/read/195786/

Investing in Love: Jacqueline Kalimunda's 'Single Rwandan'. Interview by Marian Evans of Wellwoodwoman. An extensive interview during which Jacqueline Kalimunda talks about her evolution into cinema, her films, and her experiences working locally in Rwanda and internationally across the globe. 11 November 2014. See: https://wellywoodwoman.blogspot.fr/2014/11/investing-in-love-jacqueline-kalimundas.html

She & He – A web series project produced by Lycamedia Africa Ltd. In 2016 Claudine Ndimbira Shenge launched the She&He web series Indiegogo crowdfunding campaign. The She&He documentary web series had as objective to focus on LGBT in Rwanda. While the campaign did not reach its funding objective and hence was not funded, the project proposal emphasized the importance of telling the “many stories, hidden, forgotten or simply untold that are out there.” See: http://lycamedia-africa.com/shehe/