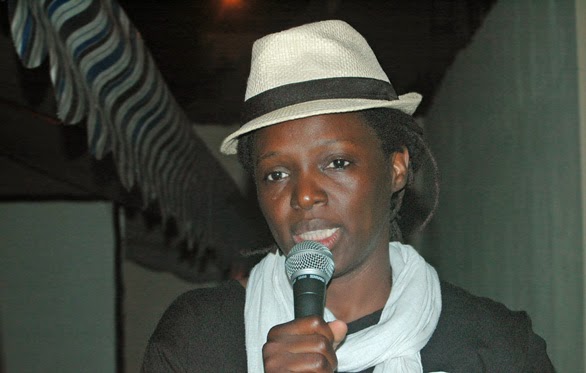 Nadine Otsobogo, the General Delegate of the Masuku Nature and Environment Film Festival reflects on the second edition which was held from 13-17 August 2014 in Franceville, Gabon. The only prize of this festival, the Audience Award, was conferred to the short film Siggil by Rémi Mazet (20 min, 2010).

What is your assessment of this second edition of the Masuku Film Festival?

Responses were fairly positive, since at the 1st edition there were not as many films, nor as much hype around the festival. The patron last year, the Senegalese environment minister, could not attend the event. This year’s patron was present, she pushed us further. She enjoyed the films, the initiative. Volunteers travelled from Libreville to support us. There is room for improvement of course, but overall it was genuinely positive. I say a big bravo to everyone on the organising committee of the festival.

Why the choice of Danny Sarazin, the director of International Festival of Wildlife and Environmental Film in Morocco to be the patron of this edition?

I wanted a woman in the mould of Kenyan Wangari Muta Maathai who could accompany us and hammer home the message about environmental protection. I searched on Google and Danny Sarazin’s name kept coming up, her profile interested me because she has been organising a festival on environmental problems in Morocco and the world for the past 20 years so she has seen a lot of things. I thought that if she could pass along to us her experiences during these 20 years that it would definitely benefit us. I sent an email as one sends a bottle in the sea. My email had gone by the wayside, but she responded three months later. She was just perfect and that gave us a boost!

Some of the guests who were originally announced did not show up. What happened?

We had not taken into consideration the administrative aspect, basically. Some people did not have the necessary time to obtain visas; the deadline was too tight. This is the case of Tunisian Habib Ayeb who had to withdraw while at the same time encouraging us. In the first edition, there were no international guests. This was the first time we had to deal with this situation.

You devoted a “carte blanche” to the French director Jean-Claude Cheyssial. The five documentaries he made ​​on Gabonese spirituality were screened. What motivated you to choose him?

Jean-Claude Cheyssial has made many films on Gabon. It was important to give a “carte blanche” to a person familiar with Gabon and who came back to give whatever he had received. I thought it would be perfect to give Jean-Claude Cheyssial the opportunity to present his films, to recount his experience as an anthropologist, filmmaker. This could be enriching for us, the Gabonese public, and for the international festivalgoers. Unfortunately, he was not able to come. I hope he can be here for the next edition. The festivalgoers loved his films.

Unlike the first edition, this year you made a call for films. How many did you receive?

We received thirty films, 18 were selected, in addition to those of Jean-Claude Cheyssial. All of the films selected could not be screened due to the unforeseen limitation of screening venues in the city.

A film market was planned, as well as workshops and meetings. Why were they cancelled?

There was a workshop in fact, hosted by François Ako, organized in partnership with the Gabonese Institute of Image and Sound. We realized that it was a bit early to launch the film market, it had been planned first for Gabonese directors, but they withdrew at the last moment, even though they had agreed in principle to the idea.

What do you plan to do, in fact, to win the confidence of Gabonese film professionals who seem to snub this festival?

Snub is a big word! At present, I think they do not see where they fit in. There is widespread suspicion of what is new, and we do not have to win over these people. “Culture for everyone” is the objective of our association. And the environment is everyone's business.

What were some of the difficulties of this edition?

We had a lot fewer partners than last year. Some roused after the event, better late than never, is it not? This year where it was held, in Franceville, in August, there were at least three screening events organized by other organisations, which we had not expected. It was quite complicated to manage. It's good that there are several festivals or parades in Gabon but what is unfortunate is that in a city like Franceville, that there are several screenings during the same period. These associations did not coordinate their events with ours.

We are not competing; our objective is that the public can enjoy films and that in the end cinema houses are opened. We encourage people to come together to offer the best of Gabonese and international culture since we have the same goal, and not to disperse, having several festivals and multiple screenings in the same country, the same city, during the same period. We need to be logical.

The audience remained rather cautious, how do you intend to garner interest for future editions?

The public is shy about themes on the environment, I think. But you noticed that when we screened the films of Jean Claude Cheyssial, the public was quite interested; because they were filmed in Gabon, undoubtedly. So we will review our program and with the guidance of Danny Sarazin, our patron, we will increase the environmental initiatives throughout the year.

Is it more difficult to organize a festival dedicated to the environment than a general festival?

Absolutely. Already, a festival is not a small matter, but on top of it, to have a theme, it's not easy. This is the second edition, but I'm surrounded by a good team. It's very hard, I have learned that sometimes people are full of talk, they promise a lot and in the end, nothing. This festival is like a small niche; but the environment, for me, this is our daily life. It is much healthier to talk about everyday life, what we live on a daily basis. Gabon, Africa, the world, is a beautiful environment that must be protected, and our awareness comes through the image. One gets the impression that it is minute but it is vast.

In two years, do you feel that this festival has helped raise awareness of the need to protect the environment?

This year, we were besieged by other images, while the films that we show do not necessarily attract a large public. It will take time, but people are not stupid. I know that little by little, people will appreciate it and understand. At some point, they will say: we want something else, a healthy environment, a clean city, protected forests. I am convinced of that.

What can we expect now for the next year’s 3rd edition of the festival?

Already, the filmmakers who were not able to attend will be invited back. The films that were not screened will be re-programmed. This festival is like a baby. Next year it will be 3 years old, it will, hopefully, stand up and walk.

Read also on the African Women in Cinema Blog: