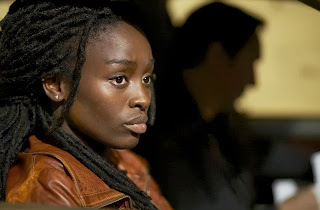 She has acted in films by Haneke, Berri, Klapish, Lioret, Sissako, Gondry… By her choice of intelligent and demanding roles,  Aïssa Maïga is at ease with and asserts her womanhood and her black womanhood. She is one of our rare actresses capable of playing both the role of a woman of French origin and a woman 100% African. Moreover, one of the only women to inspire filmmakers with such a range of roles. An encounter with a passionate artist, at the occasion of the release of Aya of Yopougon, a feminist comedy animation film (Aïssa does the voice-over of Aya) inspired by the fantastic graphic novel by Marguerite Abouet and Clément Oubrerie.

TESS MAGAZINE : Who is Aïssa Maïga?

AÏSSA MAÏGA : A hybrid being, born of the fusion of two cultures, having grown up in a third one. Up until now, all is well...

What do you do in life?

I am an actress.
I have also become producer.
I enjoy myself while working.
Besides, I don't imagine a job any other way.

What brought you to where you are now?

In high school, a professor of French. Her name: Daisie Faye: Distinctive characteristics: sensitivity and edgy humour. Her approach: to teach with fantasy. She had me go on stage in a musical comedy that she wrote. The first time was at the Folie Bergère. I was 14 years old. I immediately felt that my life would be played out in this manner: embodying characters, telling stories, creating another reality. It is this world, recreated, reinvented, that was going to help me tolerate real life.

I was a waitress and I furiously dreamed of not remaining so.

In what ways have issues regarding female and male representation in cinema, literature, and art in general been of concern to you?

Artists exist in order to propose, in total freedom, their vision, their interpretation of the world: through denunciation, lyricism, humour... In this reinterpreted world, what place will they (male or female) make for women? Subject or object? It is impossible, in my opinion, to avoid thinking about it when reading a script for example, there is always the issue of its impact on attitudes, the mind, the imagination. And so for the artist, it is about responsibility. Even though I am a woman with certain advantages--I am financially independent, my children are free from want, I enjoy considerable social recognition, I can speak and be listened to--how could I not be concerned when inequalities between the sexes, violence done to women, are still firmly entrenched in every continent?

Does this concern translate in your work? If so, how?

It is a choice that is made continuously: this film, this play, does it perpetuate clichés, or by the angle that it proposes, the interactions between characters, are negative stereotypes deconstructed? The question, that I ask myself the most often intuitively, or in any case systematically, regards gender, but also ethno-cultural identity. For me these two themes are linked by the fact that they are both related to the issue of the domination of "minorities" in society. What interests me even more is the way that awareness and empowerment can be articulated.

Could you name a book or film that intelligently examines these issues?

Camille redouble by Noémie Lvovsky is a beautiful example. The film is forceful from an artistic perspective and also the manner in which it puts the viewer into the woman's skin. It allows us to live, feel, her subjectivity, which is rarely the case in cinema.

A book or film which, on the other hand, left you deeply annoyed?

It is exactly because I was annoyed that I don't want to think about it.

A writer who reflects your vision of relationships between men and women?

Toni Morrison. Perhaps because she is part of two minorities (black and woman in the United States) and above all because she is a great novelist. She knows how to pay homage to this extremely painful history of black people in the United States and to create women characters who are subjects and not objects--complex, emblematic and always embodied. Her work is universal because in it she talks about oppression and the conquest of freedom.

Is there a notable figure in the construction of your ideas?

Advice to the young generation that are (or not) examining these issues?

Advice to editors for women's publishing?

With an unlimited budget, you may choose to be the minister of Culture or the minister of Women's Rights. Which would you choose and what would be your first step at this post?

To replace the "Day of the Woman" with "The Woman's Decade". Ten years of forceful and continuous action, could change a generation.