Marie-Clémence Paes: “there are treasures that are transmitted from generation to generation by word of mouth” 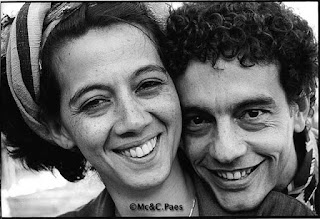 For producer and filmmaker Marie-Clémence Paes, oral cultures are the basis of her films. She discusses this organising principle, which is the leitmotiv of her work, the films that she produces and directs with her husband, cinematographer and director César Paes, as well as their company Laterit Productions.

Marie-Clémence, in 1997 and 1998 we had two long interviews during which you discussed your work as a producer and filmmaker and your collaboration with your husband Brazilian filmmaker and cinematographer Cesar Paes. During our conversation you also talked about your desire to present a multicultural identity in your films. Fifteen years later this theme continues to hold an important place in your work!

The question of a multicultural identity has always been at the heart of my everyday life as well as of our children, whose identity is even more complex than mine, as they were born in France of a Brazilian father and a Franco-Malgasy mother. Today in our work what is of utmost importance is to combat the idea that there is a hierarchy of cultures. The colonial legacy is still very much alive, here and especially in Africa.

How did you come to cinema? Through the diverse themes and projects describe your journey.

I studied sociology with several courses in ethnology, as that was the only way to study Malagasy culture. I even took courses with Jean Rouch in ethnographic cinema at the University of Nanterre. For the sake of practicality, I also studied communication and received a degree in marketing and publicity at the Sorbonne.But finally, I left the comfortable path of a career in communication to follow a stronger desire, to make, with Cesar Paes, films that could change the image of our cultures on the screens of Europe and America. All of our films have always been based on the knowledge transmitted by oral cultures. The central idea being that there are treasures that are transmitted from generation to generation by word of mouth that are never written down, and they should not be neglected or looked down upon.

To the contrary, oral cultures are of great relevance to cinema and have been at the heart of our work since the first film Angano....Angano...tales from Madagascar to our most recent film Opera du bout du monde | An Opera from the Indian Ocean which juxtaposes the Malagasy oral version and the written French version of the first European experiences in Madagascar. And between these two films, using cinema, we have explored oral cultures but also different forms of music which are derived from orality: the music of the poets of Nordeste of Brazil in Saudade do Futuro, the Jojks of the Saamis in Aux guerriers du silence | Songs and Tears of Nature, and most recently the politically committed songs of the Malagasy cult group, Mahaleo.

Laterit Production has several objectives: film production, distribution, and the promotion of your work as well as others. Laterit Productions' very impressive website is a gold mine of information! What inspired you to create the company? First a bit of a background on the origin of the name and a discussion about its goals and objectives.

Laterit comes from the word latérite, which is the red earth that is found throughout the Southern Hemisphere, in Africa, as well as Brazil and Australia. It was the common point of departure between Cesar and me: the red earth of our respective countries. So we began by making films about oral cultures, and then with Saudade do Future and Mahaleo we focused on the creation of music based on oral cultures and through these we also produced CDs from the original scores of our films. Later we launched an online boutique as a means to sell our DVDS and CDs and the works of others that we enjoy and that relate to our objectives.There is a lot of of Malagasy music on the website as well as films and now books, that focus on Madagascar, Africa and the Islands. We recently released three books related to the theme of oral cultures. Mahaleo 40 ans d'histoires de Madagascar (Mahaleo, 40 years of Madagascar history) which is a book of interviews with seven members of the group, Mahaleo, including sixty translated songs. The purpose of the book is to go even further with them after the film, in order to provide a perspective of their text as it relates to the recent history of the country. The two other books are written by Latimer Rangers, a living legend of Malagasy culture. For the most part a lyrical portrait, Transes, Divagation et délire (Trances, wanderings and rapture), is an ode to Androy, in the southernmost region of Madagascar, and most recently a transcription of several of his radio shows on popular beliefs, to which thousands of Malagasies have listened with bated breath throughout the years.

It is important for us to circulate these texts and music of African and Caribbean artists because their voices and images are too often absent from the screens and the media, both in the North as well on our own screens in the Southern Hemisphere. There is still a dearth of images and it is our duty to correct this. Jean Claude van Damme, Schwarzenegger and Tom Cruise should not be the only ones to occupy our screens.There is a thought, reflection, and creation in our countries that must be shared and transmitted to younger generations. The colonisation of the minds, alas, did not stop at African independence. Too often the movement of ideas goes in only one direction and this gives the erroneous impression of the superiority of neo-liberal western culture.

Laterit Productions presents an eclectic collection of films about cultures throughout the world, which reflects your interest in focusing on multicultural themes: cultures cross each other, identities are fluid. Some reflections on the choice of themes? The production of the films, working in many languages, cultures and geographic locations...

Our last film the Opera du bout du monde | An Opera from the Indian Ocean is the outcome of this approach. It tells the story of the first inhabitants of a small island in the Indian Ocean, a French territory still today, by weaving together three versions of the same history: the written version by a French officer of Louis XIV, the version transmitted orally from generation to generation by Malagasy princes, and the version told through an opera created five years ago by Jean-Luc Trulès, a composer from Reunion. We followed the epic of the opera troupe through the path of the protagonists, at the same sites where the history began. The importance of all of this is to underscore the fact that the version of the French officer is not necessarily more exact, nor more serious or true than the oral version of the Malagasy elders. The singing version by the Opera allows one a glimpse behind the historical facts to see that there were gaps, such as the 17th century love stories, as that between a beautiful Malagasy woman and a French officer, and from unions such as this creolisation came about.

What are the advantages and challenges of working together as a “couple in cinema”?

The theatre release and distribution of l'Opera du bout du monde | An Opera from the Indian Ocean and also other books in the works. But especially we have begun a work with Raharimanana, which as a documentary film, relates the story of the insurgents of 1947, too often forgotten by the French as well as the Malagasy.

Interview with Marie-Clémence Paes and translation from French by Beti Ellerson, November 2012.