Reflections on African women on, behind and in front of the screen 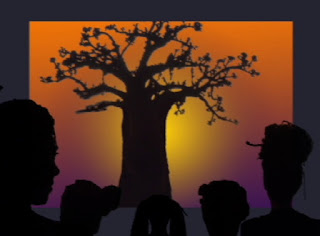 Reflections on African women on, behind and in front of the screen by Beti Ellerson*

African Women on, behind and in front of the Screen sketches in broad strokes, African women's engagement with the moving image as stakeholders and participants in both on-screen visual representation of women, and off-screen and behind-the-scene roles throughout and beyond the film production process. The first, on the screen, recalls the initial visual engagement with the film leaving the viewer to contemplate the actor’s role and the filmmaker’s intent. The second, behind the screen, conjures a team of film industry practitioners: screenwriter, director, cinematographer, crew, producer, editor, distributor, festival organiser and other professionals. And to propose a third, in front of the screen, as cultural reader, evoking a discerning audience and the film critic.

While African women as actors were not always embraced by their societies, especially during the nascent period of African cinema in the mid-1960s, they have been dedicated artists, playing an important role in the evolution of African cinema. Notably, pioneers Thérèse Mbissine Diop of Senegal (La Noire de…, 1966, Ousmane Sembene) and Zalika Souley of Niger (Le retour de l’Aventurier, 1966, Moustapha Alassane) who continue to be actively involved in African cinema initiatives, though in their personal lives during that period they experienced a great deal of difficulty being accepted, stigmatised by their on-screen characters, which often transgressed societal expectations. Nonetheless, actresses have been gradually accepted as artists, as African societies became more receptive to the moving image and recognised the role of African filmmakers as visual storytellers. Moreover they understood that films are doing important cultural work and may be used as a tool, both to visualise the society as it is, for better or for worse, and in a forward-thinking manner, as an idea, to envisage Africans as they would like to be.

While there is a more expansive range of roles for women, screen representations as a whole have yet to portray the full span of realistic representations of African women’s agency and the empowering experiences of their lives. Perhaps this tendency is due in part to the relatively small production of films from Africa—hence, the pool of subject matter is limited; as well as the growing popularity of films for entertainment or that are based on formulaic themes, none of which constructs the female character as a whole human being. Beyond these challenges, however, historically African women and many men have endeavoured to represent the woman as an agent of change and a source of empowerment, and as an active participant in the world, worthy of exploration and reflection.

A focus on women on the screen in many ways underpins a broader understanding of women’s roles behind the screen, as it is in this space that visual representations of women are constructed. Showing women as role models, leaders, mentors and decision-makers goes a long way in changing societal attitudes towards women, as well as expectations that they have of themselves and each other. This logic extends to a wide range of disciplines and fields, including cinema. While the actor is an important element of a film, women’s aspirations should not be confined only to acting. In the same way, women should not be channelled into specific professions within the filmmaking industry, as was the case several decades ago when women were funnelled into careers as film editor, and script supervisor, which until the 1950s was called “script girl”. Sarah Maldoror summons women’s participation in all areas of cinema, on the screen and behind the camera; similarly, Anne Mbaye d’Erneville invokes women to be witness to their own era and reflect realistic images of Africa in their work. And hence African women are called forth to be at the helm of creating discourse and visual representations of their own experiences.

These two grandes dames of African cinema (Diaspora filmmaker Maldoror and d’Erneville, Senegalese critic and organiser) attest to the fact that African women professionals of the moving image have long served as role models to the generation of women and men who have followed. In fact, a few African women arrived in the world of cinema before most of the male filmmakers who are now lauded for their pioneering roles, such as Thérèse Sita-Bella (1963) and Efua Sutherland (1967). Hence, from the embryonic period of African filmmaking in the early 1960s throughout the next four decades to the present, African women have forged their place, and are now firmly established on the cinematic landscape. Moreover, women were actively involved in the formation of a cinematic infrastructure on the continent in the late 1960s, notably the two emblematic pan-African film organisations FESPACO and FEPACI. And while their presence was less visible within the leadership ranks of film organisations during the following decades, in the early 1990s women-founded associations blossomed and have continued in full force to the present.

Initiatives such as film festivals, forums, conferences and symposiums perform an important role in informing the public about African women’s contributions and also serve as a space for sharing, allowing women to showcase their work and discuss issues that are important to them. In addition, it provides an environment for networking, to extend their efforts internationally for collaboration and partnership. These forums are also a space to cultivate a critical eye among the audience on the role of African women in cinema and the message that they are trying to convey in their works. From the vast span of the African continent and its transnational locations in the Diaspora, women, along with men, are using the screen as a point of convergence to show their stories about Africa and beyond, and as a visual space on which to interpret and analyse them.

Revised 05 January 2013, to include modification of title*

Email ThisBlogThis!Share to TwitterShare to FacebookShare to Pinterest
Labels: Reflections on African Women on and behind the Screen by Beti Ellerson
Newer Post Older Post Home