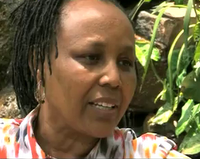 Veteran filmmaker and producer Jane Murago-Munene produced her first film, The Tender One in 1979 during the first United Nation International Year of the Child. It was this UN project that made her realize her interest in documentaries as they “give you a chance to tell things as they are and a chance to go deeper into issues than you would otherwise do”. Founder of CineArts Afrika in 1990, she is also chairperson of the Kenya National Film Association and Eastern Africa regional secretary of FEPACI (the Pan-African Federation of Filmmakers). 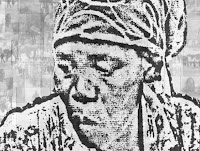 Monica Wangu Wamwere, Unbroken Spirit recounts the indefatigable efforts of Mama Koigi, mother of human rights activist and politician Koigi wa Wamwere, who was detained as a political prisoner in Kenya. She participated in the 1992 Mothers' Hunger Strike, a campaign to release political prisoners, and is a member of the Release Political Prisoners pressure group.

Biographical text published on the 13 October 2010 Blog post: Jane Murago-Munene: Entrepreneur of the Cinema Arts in Kenya
Posted by Beti Ellerson at 17:49