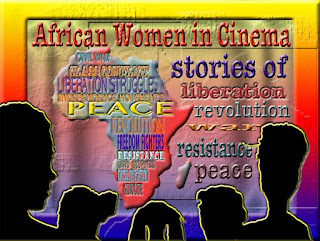 At the inception of African cinemas, women have played a role in documenting Africa in war and conflict in some cases under perilous conditions that have put their lives in jeopardy. Sarah Maldoror (1929-2020) is best known for her activist filmmaking during the African liberation struggles; most notably Sambizanga, released in 1972. Anne-Laure Folly was inspired by the film, following Sarah Maldoror's footsteps thirty years later with her documentary Les Oubliees (1996) about women's lived experiences during and after the liberation war in Angola. Describing Sambizanga as one of the masterpieces of African cinema, Anne-Laure Folly regards Sarah Maldoror as a trailblazer. Sarah Maldoror's story in Sambizanga told from a woman's standpoint, was significant because of the prominent place it positioned women in the struggle for African independence. She asserts, "most importantly, the participation of women in liberation struggles must be shown, because wars will never end unless women participate in making it happen."

Algerian Horria Saihi wanted to highlight a different side of Algerian women involved in political struggles, other than those who are often seen crying at funerals, but rather those who fight. In the documentary Algerie en Femme (loosely translated, Algeria's women, 1996) Horria Saihi presents the political situation in Algeria at the time, a dramatic situation, where each day has its lot of assassinations, destruction, and massacres. The film portrays women of different social categories; peasant women who are illiterate, intellectuals and artists, as well women who take up arms to defend their own lives and the people in their villages: "women in arms and those who fight peacefully, so that life continues, so that Algeria continues to stand on its feet." Anne-Laure Folly looked for an "alternative discourse" not based simply on reason, filled with dates and facts. Treating the problem of war from women's perspectives going beyond analysis and preconceived notions of war and suffering towards lived experiences, "survival, dignity and a sense of hope."

Fanta Nacro's harrowing fiction film, The Night of Truth, traces the dramatic process of truth and reconciliation between two bitter enemies, whose leaders come together in a gesture to end of the conflict. The film is inspired by Fanta Nacro's family history, of her uncle who, accused of inciting a coup, was brutally murdered. Taghreed Elsanhouri's Our Beloved Sudan (2011) documents the breakup of the country that will become two: Sudan and South Sudan. She had this to say about the film: "Regarding the separation I feel we had enough time since independence in 1956 to figure out how to forge a unifying identity. We failed and the consequence has been partition. My concern is about whether we will have the maturity and the leadership to create two new stable nations or whether both new entities will become failed states with all the destructive fallout and suffering that such an outcome implies."

Salem Mekuria's documentary film Sidet (Forced Exile, 1991) focuses on the trials and tribulations of being in exile. The film depicts the experiences of three Ethiopian women who seek refuge in Sudan after leaving the unstable environment of their homeland in the 1970s and 80s due to political unrest and its consequences. Like Anne-Laure Folly, Salem Mekuria also views women's dialogue as an alternative discourse, going beyond western interpretations and accounts to reveal the experiences of a people who "remain buried under the busy rhetoric of disaster and relief." Tanzanian Flora Mmbugu-Schelling highlights the plight of refugee women in These Hands, (1992), a documentary film about the experiences of Mozambican women refugees who work in a Tanzanian quarry outside of Dar es Salaam. Having fled the turmoil and devastation caused by long years of civil war, the women go about their daily toil at the same time continue their cultural practices of singing, dancing, and mothering. In Asylum (2007), Rumbi Katedza focuses her lens on Sudanese refugees in the UK, which is considered a "safe" country, though for the refugees, the psychological effects of their experiences of trauma remain. She reveals that, "you are never safe from the prison that your mind can create for you".

Zara Yacoub directs her attention towards the trauma of children who have lived through the experience of war in her docu-drama Les enfants de la guerre (tr. children of war, 1996). She highlights the troubling aftermath of war when international attention has long disappeared and the survivors, women and children, often the most devastated, are left to fend for themselves. This same desire to portray the intimate experiences of children who are victims of war compelled Wanjiru Kinyanjui to tell the story of Gatashya, a ten-year-old boy who managed to survive while his entire family was lost to the 1994 genocide in Rwanda where both Tutsis as well as Hutu sympathizers were massacred.  Filmed in 1996 in Kigali for a German television series, Wanjiru Kinyanjui researched the events for "Rights of Children" that revealed the horrendous experiences of children who watched their fathers and mothers being hacked to death. In the end, she questioned whether it would ever be possible to make a film that was suitable for children who have not gone through war, but all the same, it was horrific for all who viewed it.

Rama Thiaw uses her camera as a weapon: “I wanted the camera to replace the adversary, to face it head on.” Her films explore the inner workings of resistance, rebellion and struggle and what it means to be a socially, politically committed artist: “It is easy to do so when you have money and live in a villa somewhere, but when you have nothing, that is when the act of commitment takes on all of its meaning.”

Similarly, through cinema Pandora Hodge hopes to bring culture back to the country after the devastation of a 14-year civil war in Liberia. With her team of students, and the many enthusiastic volunteers, various venues throughout the local community are used for film screenings: "Through the cinema, [young Liberians] will be able to create a better future for themselves, their generation and their country."

Concerned that women's experiences, knowledge and capabilities as peace-builders are not taken into account and are largely unnoticed outside the family context, UNESCO sponsored a pan-African Women's Conference on a Culture of Peace held in Zanzibar, Tanzania in 1999 entitled "Women Organize for Peace and Non-Violence in Africa". An objective of the initiative was to gender the issues of disarmament, peace, security and other legal and political matters; areas often considered "gender neutral". The United Nations International Day of Peace encourages sustainable peace for a sustainable future, "both within and among all nations and peoples". These efforts coincide with African women filmmakers' view of women's perspectives on war and peace as an "alternative discourse" to the masculinist rationalizations that are generally proffered. By focusing on the issues of war and conflict, of peace and reconciliation from a woman's perspectives, African women in cinema are joining the efforts of the cohort of women throughout the continent as they search for ways that challenge the perverse logic of violent conflict. Many of their stories go beyond the outward effects of war and violence to explore the psychological and social aftermath and their manifestations as it relates to the experiences of women and children; others explore the search for love, hope, dreams, a future.

Following are articles from the African Women in Cinema Blog regarding stories of liberation, war, revolution, resistance, peace and reconciliation:

You Come from Far Away, a film by Amal Ramsis (Egypt)
https://africanwomenincinema.blogspot.com/2019/04/you-come-from-far-away-film-by-amal.html

Neveen Shalaby and the Agenda: The Experiences of a filmmaker - participant of the Egyptian Revolution of 2011
https://africanwomenincinema.blogspot.com/2013/01/neveen-shalaby-and-agenda-experiences.html

Annette Kouamba Matondo: The Duty of Memory and the Case of the Beach Disappearances
https://africanwomenincinema.blogspot.com/2012/06/annette-kouamba-matondo-duty-of-memory.html

Taghreed Elsanhouri: "Our Beloved Sudan", a film about the partition of the country
https://africanwomenincinema.blogspot.com/2011/11/taghreed-elsanhouri-our-beloved-sudan.html

Nadia El Fani and the Freedom of Conscience
https://africanwomenincinema.blogspot.com/2011/05/nadia-el-fani-and-freedom-of-conscience.html