Women of Niger in Cinema, Visual Media and Screen Culture 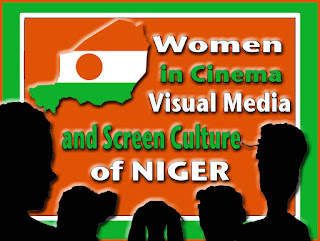 Women of Niger
in Cinema, Visual Media
and Screen Culture

Niger counts as one of the early centers of cinema production on the continent, with pioneer Moustapha Alassane directing some of the first films.

Ethnologist and filmmaker Mariama Hima who was the first woman to direct a film in her country in the early 1980s, later held positions as museum director, politician and diplomat. She set the stage, especially as documentarian, for the women who followed and continue to produce films from the 1980s to the present.1

In the documentary Al’leessi…an African actress (2004), Rahmatou Keïta rekindles the flame of a once fledgling film industry. The vibrant works of the prolific filmmakers of Niger beginning in the mid-1960s are a mere footnote in African cinema history. Weaving the story of pioneer actress Zalika Souley, Keïta relates a parallel story, the history of the early cinema of Niger. Her purpose for making the film was to celebrate the elders of Niger cinema and elevate them to their rightful place as cinematic pioneers.

Zalika Souley, the “bad girl” of early cinema of Niger starred in numerous films. A significant highlight which is not a focus on her cinematic timeline, is her role on the founding committee of FEPACI in 1969. In 1989, she was elected as the president of the newly created L’Association des Actrices Africaines/The Association of African Actresses, in recognition of the role she played in asserting the value of women in the world of African cinema. Thirty years later, in 2019, at the Festival International du Film des Lacs et Lagune (Festilag) a tribute was made in her honor, at the first general assembly of African Actresses held at the festival.

Aïssatou Adamou had this to say about her evolution into visual media:
The National Television of Niger was established in 1978, as an educational television.  At the time, only experimental programs were shown. I was the first woman to work as television announcer.  I had many problems at the beginning, because a woman presented on television speaking to the public was not highly regarded. Initially, the public was critical of my public image on television.  However, this did not discourage me, because I had the encouragement of my parents and friends to persevere.  Gradually, people realized that women could work in the television industry just as well as men. They realized that there is no difference. Because of this gradual change in attitude, as the years passed, more women became interested in television.3

Twenty years later, the evolution of attitudes is especially evident. Aïcha Macky notes that mentalities are changing: My film talks about fertility, a taboo subject, like Amina Weira's film, which is about the consequences of uranium mining. These are situations that people experience. The State has understood the importance of the arts in changing mentalities. The Ministry of Culture has become a "cultural renaissance". She had this to say about her evolution into cinema and the state of cultural production in Niger: I come from a sociology background and so I fell into cinema somewhat like a fly in ointment. As a woman, I was perhaps lucky because I grew up in a mainly male environment: my games were those of boys, and I was never responsive to dolls, for example. I was also from an early age involved in cultural clubs where women knew how to assert their position. In Niger, the gender parity law of 2000 applies equally to appointed and elective positions. This, however, reinforces prejudices about the merits of women for promotions and I prefer to do cinema just as men do. The main difficulty is the lack of self-confidence. The Tuareg society is patriarchal and women can only be homemakers and care for the children, but things are changing. Most of the films [in Niger] are made by women. Zalika Souley was called every name in the book during her time: we are now evolving into a more open period. Cinema was viewed as a diversion made by immoral people, and yet the films presented in the local languages speak of social problems. The population quickly identified with them, to the point that there was an evolution in attitudes. Women in particular, make films about subjects that men have difficulty dealing with properly.4

In Anger in the Wind, Amina Weira travels to her hometown of Arlit in northern Niger, where she interviews the town’s residents about the negative environmental and health consequences of plutonium mining. French mining companies have mined uranium there since 1976. Today the region is contaminated, and large numbers of people have died young and suffer from chronic illnesses. Amina Wiera’s father, a retired uranium mineworker, is at the heart of this film. He shares his memories of 35 years spent in the mines.

Nana Hadiza Akawala obtained her Master 2 in documentary filmmaking at Gaston Berger University (UGB) in Saint Louis, Senegal. She also holds a Master 2 in Marketing and International Business Management. She was Director of Television Bonferey and Secretary General of the National Centre of Cinematography of Niger (CNCN). She is currently working at the Ministry of Cultural Renaissance of the Arts and Social Modernisation. In her film Bibata est partie, Nana Hadiza Akawala journeys to find the woman who worked for her family when she was an adolescent and whose departure, left a void in her life.

The TV series Une saison au Niger, released in 2019, is the first production under the designation "Nigerwood". Director Samira Seyni Djingo describes her work as "the cry of a people concerned about safeguarding their values"


Articles featuring Women of Niger in cinema, visual media and screen culture on the African Women in Cinema Blog

Thanks for this site! I will visit often.

Hello, thank you so much for writing this blog! I am currently studying for the semester at the University of Ghana in Accra and I was interested in attending FESPACO, but it is not being held. However, what do you know about the festival FESPACO is helping to put on this year entitled: Des Journees Cinematographiques de la Femme Africaine de l'Image? Thanks! Katie Ashmore
kashmor1@swarthmore.edu