Words of Frieda Ekotto, producer of the film “Vibrancy of Silence: A Discussion With My Sisters” 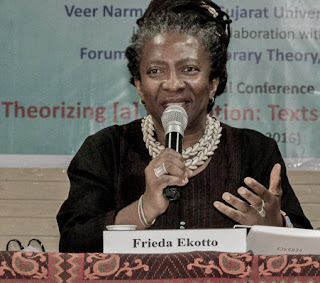 Words of Frieda Ekotto, producer of the film “Vibrancy of Silence: A Discussion With My Sisters”

In your work you have centered the role of women as artists and cultural activists in the context of knowledge production. African women makers are the “primary sources” of your study and research, their voices and the relating of their experiences inform the project Vibrancy of Silence. Please elaborate on the notion of African women and the production of knowledge as the theoretical framework of your project.

We assert that knowledge produced by women is key to understanding modern Africa. It cannot exist without their participation, for their work is essential to a return to the "colonial library" (Mudimbe 1988). This is because in Africa, women are at the center of everything. As in Pierre Bourdieu’s imaginary (1979), they are our tank and our “cultural capital.” Yet the power of their work is often invisible. Vibrancy of Silence is thus a long-term initiative devoted to creating a multi-media archive of Sub-Saharan African women and its diaspora. By bringing attention to women’s cultural production and experiences, the project offers both broad contextual scope and space for individual women to speak about their experiences. It addresses autobiography and storytelling. It explores and critiques notions of the archive, even as it creates a tangible archive of its own for this and future generations, and it brings attention to work by women cultural producers who actively examine contemporary life within Africa and its diaspora.

The initiative begins in the awareness that being a woman in Sub-Saharan Africa and the diaspora can signify a multitude of vulnerabilities. Indeed, for many women, access to fundamental necessities such as healthcare and education is only theoretical. Even more critically, African women are often objects of discussion rather than its agents, and their work is thus rendered invisible, their voices silenced. It is for this reason that Vibrancy of Silence approaches visibility in the tradition of Toni Morrison’s work Playing in the Dark: Whiteness and the Literary Imagination. Through close readings of cultural production by women on the continent and in its diaspora, it explores historical trajectories as well as far-reaching tensions and anxieties.

It also draws attention to the symbolic function women have had within African society. Indeed, one of Vibrancy of Silence’s primary aims is to deconstruct received ideas about African women. It invites women from many walks of life, countries and cultures to discuss their experiences, work and lives. When women tell their stories and offer their analyses of cultural factors and forces, they challenge and correct pervading silences. Thus, rather than talking about invisibility abstractly, the project offers concrete stories and visual art forms to supplement and support them. In addition, through analysis of transcribed and translated narratives, the project explores other issues such as genre conventions, gendered subjectivity, and narrative truth-value.

The concept of autobiography as “an insertion of self into society” illustrates both the dynamics of interpersonal relationships and the broad range of discursive articulations of individuality. African women’s stories include elements of the concrete that shows the limits of postcolonial theories of history. For example, as African women have shown in their creative and knowledge-generating work, “history is,” as Fredric Jameson states, “what hurts.” Attention to autobiographical materials creates a space for women’s stories of suffering that have long been invisible. In addition, their work addresses questions of status, which are always conditioned upon the cleavage between their place in society and their work within the family.

Along with visibility and storytelling, Vibrancy of Silence consciously addresses the concept of the archive as a place to access images and cultural production by African women and its diaspora. We do this because we are aware of the powers of the archive to shape the substance of our personal and collective memories, even as they locate visions of the past and project scenes of the future. Not just a repository of records, the archive governs what can be uttered in the present. It cannot be seized in its entirety: incommensurable, it looms larger than those who amassed the parts that constitute its whole. The archive must be probed for iterations (new versions) of the historical past, a past that is always disputed.

Within an archive, images are powerful and affective mnemonics that draw the contours of the politics of (historio-graphic) representation. In focusing on the visualization of Africa through images, this project interrogates the ways in which societies witness, express and document their heritage and continuing identities through a vast array of tangible and intangible forms and formats. It asserts that traces of buried, discontinued, or untold stories about the past can often be discerned at the margin of the archive by the eager eye that reaches for them.

The archive and its images are constantly shifting. Yet at any moment, you may enter it and appropriate its dynamic expressions: images of the archive, archiving images, images as archiving in process. At this Borgesian garden of forking paths, we find the African artist and her desire to create (with) meaningful records and impact the discourses on her community. By giving the images a trajectory that articulates some idea about the past, the artist crafts a more or less fleeting trace that also becomes part of the archive, awaiting new, unforeseen deployments.

In addition to addressing theoretical aspects of the archive, we are working to create one in tangible form by collecting documents, including books, different forms of narratives and visual records. In this context, it is vital to talk about aesthetics. For African women as cultural producers, it is impossible to distinguish their work and the artistic phenomenon they represent as a whole, the visual images of their arts, the subject and object of their work. Here attention to aesthetics is critical. As artists, these women are creating work that explores experience in subtle and insightful ways.

Finally, Vibrancy brings attention to women’s activism. From north to south and from east to west, African women are producing images and knowledge that affects society. These women are activists, and therefore in opposition to regimes of power; they are controversial, aggressive, and provocative. Despite the rising repression of dictatorships, African women remain involved, anchored in the social. They are aware of their position as women upon the African continent. As such, many appropriate monstrosity à la Sade as perversion, an experience that exposes political violence as a force that causes people to suffer on a daily basis.

For example, African women filmmakers rely on the power of images to bring about a social conscience. They insist that the visual remain on the side of minorities, particularly women, and all disenfranchised. With direct interventions, they create fractures within unspoken traditions that oppressed them. Their subtle images are sensitive to the unseen, to what remains invisible within the political realm, to the silence that keeps women in the shadows. In addition, they can speak of intimate matters. The can question the ongoing suffering of women within religious systems, address the psychiatric illnesses that stem from economic exploitation, which alienates women and young people in particular, as well as shed light upon women’s sexual lives, a highly taboo topic. Critically, this work is beginning to address the fact that the experiences of African women conform neither to African heteronormative discourses, nor to those established by Western LGBTQ+ communities and scholarship. Here, too, storytelling and visibility are keys to understanding the beauty and variety of women’s lived experiences.