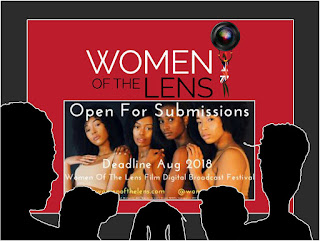 Women Of The Lens was created to reveal the complexity, diversity and multiplicities of black women and women of colour.

London, 15th June 2018: Women Of The Lens Film Digital Broadcast Festival is open for film, digital and broadcast submissions using FilmFreeway as the portal for production submission with a deadline of August 2018.

This year we're pleased to be collaborating with Genesis Cinema, 93-95 Mile End Road, London E1 4UJ as the venue for the Festival's event on Friday 16th, Saturday 17th and Sunday 18th November 2018.

This UK-based Festival was created to showcase the work and challenge perceptions of black women and women of colour in front of and behind the camera. The underrepresentation of diversity in the creative industries remains stubbornly low despite the protestations of change and 'acknowledgement' of disparity. Women Of The Lens was born because the wait for those in positions of change to do something about the improvement of the representation of black women in British industries both in front of and behind the camera, has expired.

You don't have to be black and/or identify as a woman to submit productions, what we will be looking for is your commitment to changing perceptions in front of and behind the camera. So we ask, what do the narratives look like for black women in films? Are we the audience following her story, her motives, her actions or is she a stereotypical 'side-piece' for a run-of-the-mill story? Behind the scenes, the Festival is asking well, who do you have in decision-making positions in your productions? Are you seeking to diversify your crew?

Founder and Director Jennifer G. Robinson says; “Following a first was always going to be difficult. The Festival's launch was humbling, such was the support and engagement from audiences both on and offline. The quality of the productions submitted was great. The bar has been set and it is high, but with the growing sense of purpose and the mounting sense of worth and demand for recognition for women's talents in the industry, meeting that bar can be achieved.  My responsibility to filmmakers has not changed as they submit their precious creations and providing content which reflects audience life experiences. I’m excited by the coming events and humbled by the support already received.”


The brainchild behind Women Of The Lens is Jennifer G. Robinson. Jennifer has over 25 years of experience working in the creative industries to include education. Jennifer has worked with other industry professionals to produce one the longest running London-based film festivals – the black filmmaker international film festival. To say that Jennifer is ‘passionate’ about the industry is clichéd, but it’s the best word to use that describes her innate commitment and loyalty to create and deliver a Festival of integrity to grow to fulfil its ethos as described above.
Posted by Beti Ellerson at 10:39

Email ThisBlogThis!Share to TwitterShare to FacebookShare to Pinterest
Labels: Call for entries, film festival, Women of the Lens