Vilole Images Productions (VIP) is pleased to invite filmmakers to submit documentaries, short films and full-length feature films to the Shungu Namutitima (Smoke that Thunders) International Film Festival of Zambia (SHUNAFFoZ). The festival will run from Friday 2 December to Saturday 10 December 2016 in Livingstone the tourist capital of Zambia.

Celebrating the 11th Anniversary, under the theme “INCLUSIVE COMMUNITIES”, the festival will accept Zambian and African films into competition. However, films from all over the world are for screening ONLY.

Besides the theatrical, institutional and community screenings, lined-up are film forums and conferences. Also planned is a set of film skills and production workshops and forums filled with exciting activities. It will conclude with a gala and award night on 10 December 2016 at Maramba Culture Village.

Deserving filmmakers who have produced quality films with an aspect that touches on or demonstrates alignment with the main theme “INCLUSIVE COMMUNITIES!” from Zambia and Africa will be awarded. Submission of products should be in DVD PAL format only with the requested press package. Uncompleted packages and late entries will not be accepted.

TO BE ELIGIBLE FOR THE COMPETITION: 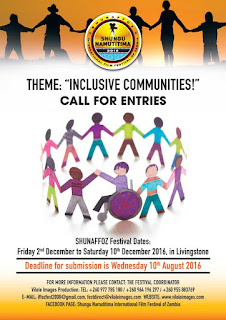 - The film(s) should have good production and entertainment quality

- The audience will also have the privilege of selecting a feature film of their choice to give an award, and movies from all over Africa are eligible to enter for the selection

Please mark your package, “NCV – No Commercial Value – Film Festival Entry”, so we do not incur duties and taxes when the package is brought into Zambia.