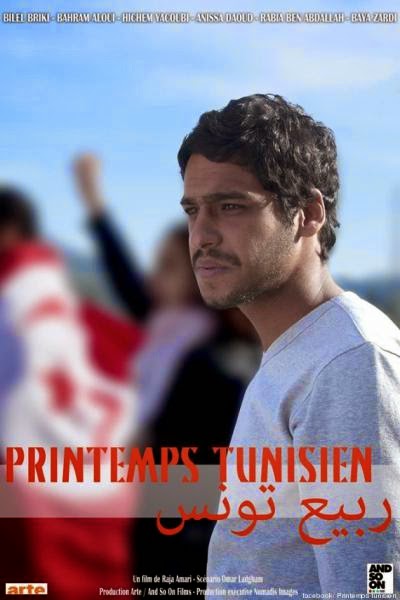 
[English]
Programmed for December 18, 2014 on the French cultural channel Arte
Tunisian Spring is a charge taken on by one of the most talented Tunisian filmmakers.(1) It would be unfortunate to miss this telefilm, which was shot on location in Arabic with Tunisian actors; even though the scripting structure limits its impact.
In all her films, Raja Amari has been interested in transgression and alienation. Hence, it is obvious why she accepted the adaptation of the screenplay by Omar Ladgham about this historic moment—the revolution, when everything changes. However, it is difficult to recognise Raja Amari’s cinema in this telefilm, having been accustomed to the great delicacy of expression and the very good image quality of the feature films (Satin Rouge and Secrets), as well as the shorts (April and One Evening in July). In spite of this drawback, Tunisian Spring is definitely worth seeing.
In situations of revolution, filmmakers take their camera to document the events. Thus in 2012 the Carthage Film Festival showed the enthusiasm of a country just coming out of the throes of a dictatorship with a flood of films about the widespread momentum as well as the dramatic effects of the confrontations. How then will fiction, with its power of retrospection and metaphor, craft this historical memory? The process is still on going and it is not yet time for fiction. However, other feature film projects are incorporating it so as not to appear out of touch. Nouri Bouzid for instance adapted in extremis Millefeuille whose original screenplay on wearing the veil had been written before the events.
Like Bouzid, Raja Amari does not use the revolution as subject but focuses on characters whose lives will be disrupted by the events. The film centres on three penniless musicians trying to survive by playing at weddings. Each follows his own path. Moha (Hichem Yacoubi) is a good lutenist but is convinced that the only solution is to go abroad. The singer Walid (Bahram Aloui) is enough of an opportunist to accept a relationship with a counsellor of the First Lady at the Presidential Palace. As for Fathi (Bilel Briki) the darbuka player, because of the widespread corruption he cannot start a teaching career; moreover, he is in love with Noura (Anissa Daoud), a rebellious, beautiful bourgeoise.
By trying to aim broadly it is difficult to escape the tendency to stereotype, categorising each character according to a predictable, established programme; and thus the dialogue cannot avoid a certain theatricality despite the quality of the actors. Integrating the constraints of the telefilm, Raja Amari is not able to detach herself from it, which gives to Tunisian Spring, a hint of superficiality, of déjà vu: four friends tossed around by a life overtaken by the grand History, without them seeing it coming.
All is stifled and raging in a country where disgruntlement eventually challenges police violence, though everyone taking a separate path. Such as the fruit and vegetable vendor who sets a fire after being harassed by two police officers (reminiscent of Mohamed Bouazizi's confrontation with the civil police officer Fayda Hamdi), both their movements more suicidal than committed. It is only Noura who, following the images of the insurgency on her computer, gauges the intensification of anger and resistance, as these images are shared on social media. But her mobilisation remains epidermal and isolated, disconnected from reality. None of these characters is a hero and the film does not judge their choices: they suffer more than they act and are eventually drawn unwillingly into a wind that outpaces them.
Raja Amari offers us in this telefilm, which at the shooting in November 2013 still bore the title "Tunisian youth", the current state of a youth marked by uncertainty, and trapped by the contradictions at the eve of the fall of Ben Ali. However, for this youth it is also the price of History, none of the characters escapes unscathed.
A useful reminder of what a dictatorship is and how it demeans individuals, Tunisian Spring can be read as a retrospective meditation on the contradictions at work before and during the historical phase of the revolution, and which the Tunisian youth continue to deal with today, now faced with the inevitability of disillusionment.
Despite their dissatisfaction, the contempt that characterises the relationship of the three musicians at the beginning—and we know that it is alive and well, as is the anger of the youth—appears to be the driving force of their survival.
But what Tunisian Spring has difficulty articulating in its rather too well-oiled scheme, is the substance of beings and the brilliance of their revolt, whether singular or not, whether it is or is not, morally acceptable.
1. The production company Telfrance (Plus belle la vie) initiated the project with scriptwriter Omar Ladgham. Initially, Abdellatif Kechiche was to direct the film, but the production of La Vie d'Adele took longer than expected. Raja Amari, who was asked to come on board, enjoys scenarios that do not fall into the glorification of the revolution. It was logical that the Tunisian executive production was assigned to Nomadis Images, the company of Dora Bouchoucha, Raja Amari’s long-time producer.