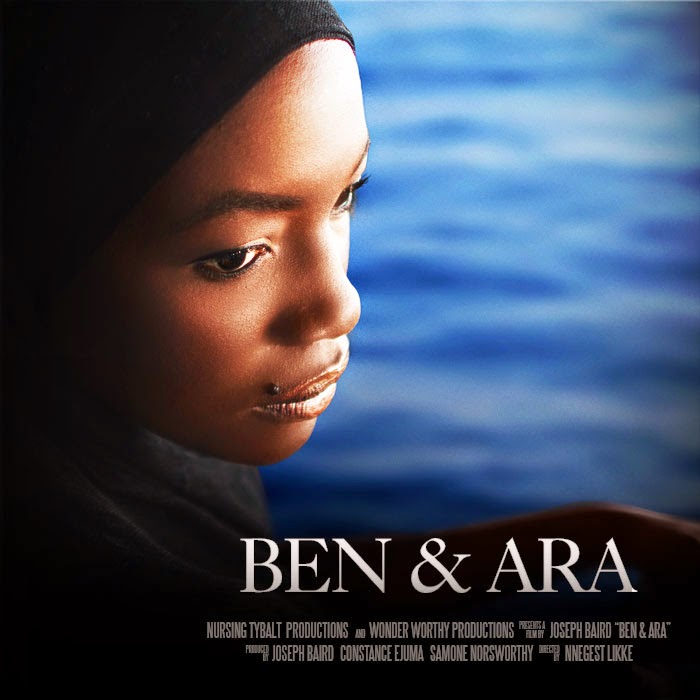 The film project BEN & ARA directed by Nnegest Likké and co-produced by and starring Constance Ejuma is now in the post-production stage. An Indiegogo crowdfunding campaign has been launched to raise $25,000.

When asked about the positive reception of the film project so far Constance Ejuma had this to say in an interview with the African Women in Cinema Blog:

I think the reason for the positive reception is two-fold. One reason is that Ben & Ara is a love story, which makes it relatable and universal. I think there is something about the story that touches people and captures their imaginations. The other reason is that this film is a tangible thing that people who support us could get behind. Joe and I have spent many years in Los Angeles pursuing acting careers, and though we’ve been doing all the things that actors here do to move their careers forward, it’s really difficult to convince people back home that you’re making progress when they don’t see you on TV on a regular basis. The excitement around the prospect of seeing us on the big screen was also a motivating factor for our families and friends.

For me Nnegest was the best fit. She wrote and directed Phat Girlz which was successfully distributed by a major studio. She was also familiar with the subject matter of our film and it certainly doesn't hurt that she has an African background.

My manager is acquainted with her so he sent her the script to gauge her interest. We met, bonded over a love for art-house films, and she offered a lot of constructive feedback but ultimately agreed to come on board.

Drawing from her own experience as a writer, her goal was always to stay true to Joe’s intentions while figuring out the most authentic way to execute on those intentions with the limited resources we had. Working with her bolstered my confidence as an actor, especially since I had the added pressure of being a producer. I felt like she was always thinking ahead, trying to catch blind spots and constantly working to capture gems that would enhance this art-house feel we were going for. She was relentless in her efforts to make this a great film in spite of the challenges we faced, which is something I truly admire about her. (African Women in Cinema Blog)

We believe that something amazing happens when two people, from drastically different points of view, are able to look past their differences and have a heart to heart connection. And two people connecting despite cultural barriers is something everyone should experience, if only vicariously through our story. That is our goal with BEN & ARA, to open us up to one another just a little more.

When it comes to making movies, it takes a village to make it come to life. We've gone pretty far in the production process and accomplished a great deal. We have a "film in the can" as they say. Now what? We're only halfway through the filmmaking process and we need YOUR help to see it through to the end.
We need to raise funds to complete post-production, which involves editing, sound, music and color correction. Without these things we don't have a movie, and without your help, we'll have a pretty difficult time making this dream a reality. No amount is too small so we welcome any and all donations.

Visit BEN & ARA – Feature Film Indiegogo for details about the fundraising efforts and to make a contribution.