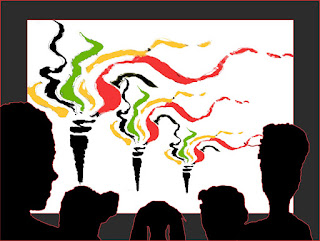 The first generation of African cinema has passed the torch to a second and third generation of filmmakers. A cinema born in the 1950s and 60s, known for its postcolonial themes, directly confronted the oppressive nature and contradictions of colonialism.

Among this second and third generation are women who have drawn important lessons from their elders.

Some of these women take the torch from their mothers, fathers and uncles, others have relit or are keeping the torch burning to shine light on the accomplishments of those who have come before them.

Anne-Laure Folly Reimann of Togo pays homage to the life and works of the matriarch of African cinema, Sarah Maldoror. Guadeloupian of African descent, she has had a long presence in filmmaking in Africa. Having studied cinema in the Soviet Union in the early 1960s, after a short stay in Morocco in 1963, she went to Algeria to work as Gillo Pontecorvo’s assistant for the production of the classic film, The Battle of Algiers. Her debut film Monangambee, was selected at the 1971 Cannes Film Festival under the Quinzaine des réalisateurs/Directors' Fortnight representing Angola. In 1972 she made Sambizanga, considered her masterpiece; a film about a woman's experience during the Angolan liberation struggle. In her documentary, Sarah Maldoror ou la nostalgie de l'utopie, Folly Reimann pays tribute to Maldoror, having followed the path that she forged. Some twenty-five years after the release of the film Sambizanga, she too highlights women's experiences of war in Angola, in the film Les Oubliées (1996).

Gyasiwa Ansah of Ghana follows in the footsteps of her father, veteran filmmaker Kwaw Ansah. She grew up in cinema often present on her father's film shoots. As she grew older she began to take on duties on the set and finally decided to go to film school. She continues to work with her father at his television production company, TV Africa.

French-Congolese Claude Haffner, takes the torch from her late father, Pierre Haffner, an important French voice in African cinema criticism. Her 2001 DEA (Master's) thesis, Le documentaire africain, un remède éventuel aux maux dont souffre le cinéma africain? loosely translates as "The African Documentary as Possible Remedy to the Ills of African Cinema." In addition, she has taken on the role of filmmaker. Her documentary, D'une fleur double et de quatre mille d'autres (2005), a tribute to her father, is situated at the intersection of her double passion--criticism and filmmaking--focusing on many of the issues that he confronted in his work on African cinema. Her autobiographical documentary, Footprints of my Other 2012), is about her place “in between”, Africa and Europe, as she searches for her Congolese roots.

Rahmatou Keïta of Niger rekindles the flame of a once fledgling film industry. The vibrant works of the prolific filmmakers of Niger beginning in the mid-1960s are a mere footnote in African cinema history. Weaving the story of pioneer actress Zalika Souley, Keïta relates a parallel story, the history of the early cinema of Niger. Her purpose for making the film Al’leessi...An African Actress (2004), was to celebrate the elders of Niger cinema and elevate them to their rightful place as cinematic pioneers.

Mati Diop, born within an artistic milieu--her mother is a photographer, her father is musician Wasis Diop, and her late uncle, Djibril Diop Mambety (1945-1998), a giant of African Cinema--works quite naturally within the domain of sound and image. Her evolution into cinema was a result of her interest in the image rather than a direct influence of her uncle, Djibril; though she gradually understood that his legacy is an important force in her work. Her film 1000 Soleils/1000 Suns (one may recall La petite vendeuse de Soleil/The Little Girl who Sold the Sun, Mambety's last film released posthumously in 1999), is dedicated to him--tracing the incredible journey of the cult film, Touki Bouki, his masterpiece. The film made in 1973, nine years before Mati's birth, is a means to better understand her uncle. In her view, the film is fundamentally about him, in a very profound way. When making her first film Last Night, she was not yet aware of the cinematic inheritance of Djibril. She has recently embraced this bond which has increasingly imposed itself as she has become more confident in her work. But for Mati this inheritance only becomes important when she has her own work to show for it.
Ghanaian filmmaker Anita Afonu, passionate about the preservation of Ghana's cinematic history, meticulously researched the evolution of Ghanaian cinema, documenting it in the film Perished Diamonds.

Thus, accepting the torch passed on from the generation before, means that one must assume the task of continuing the work forged by the elders.

Claude Haffner biography (In French only):

Mati Diop interview (In French only)