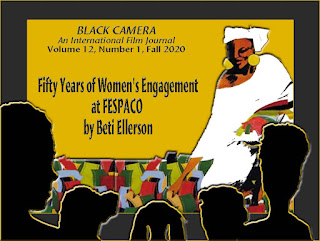 FESPACO has long served as a point of reference both in Africa and internationally. It has been the meeting point beyond the physicality of its bi-annual location, and holds a dominant place in the African cinematic imagination. What has happened, what is happening at the moment during its weeklong activities, and what will happen in its future are of significant import. Its legendary history continues to loom large in the annals of African cinema, and, the role that women have performed within it. Likewise, on the continent, in step with the global appeal for women's increased visibility on the cinematic landscape, a clarion call has been sounded: for parity in leadership indicative of women's capacity as decision-makers; and their place: as half of humanity. Employing a wide lens to explore trends, tendencies, and developments, this article will consider women's engagement at FESPACO, examining concomitantly, past accomplishments, present realities and future possibilities.