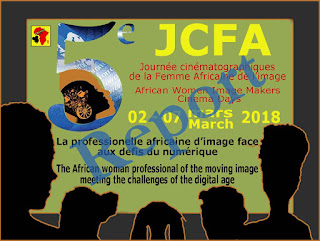 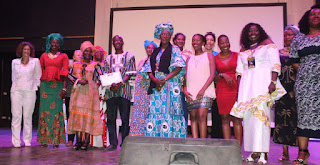 Panel: "The women professional in the digital age"

On the occasion of the 5th edition of the Journées Cinématographiques de la Femme Africain de l'Image (JCFA), a panel was organized on Friday, 2 March 2018, on the theme of this edition, "The women professional in the digital age". The panelists were filmmakers Balufu Bakupa-Kanyinda and Mamounata Nikiéma. Balufu Bakupa-Kanyinda is a scriptwriter, director, producer, film teacher, writer and poet, has directed several films, including Le damier-papa national oye!, Article 15a bis, Afro@digital and Juju factory, all of which have won prestigious prizes at major festivals, moreover, he is the initiator of the Thomas Sankara prize at FESPACO. As for Mamounata Nikiema, she is director and producer, manager of Pilumpiku Production, author of several documentaries including Savoir raison garder and Lumière d'octobre. Before the panel presentations, the documentary Afro @ digital was screened to contextualise the discussions. Everyone agrees that digital technology has simplified the work of professionals, though to varying degrees. According to Balufu Bakupa-Kanyinda, whose generation debuted with the 35 mm, Africa has lagged behind because no country has yet developed a digital policy and film industries are absent on the continent. Though digital technology offers more possibilities for cinema, there is nonetheless some misunderstanding.  By focusing on training, this situation could be changed through generational exchange, and the mastery of this tool by moving image professionals of the "digital generation". In this present group is Mamounata Nikiéma, who has been able to make her way into cinema thanks to the digital. For her, digital technology is a tool that has made it possible to democratise cinematographic practice, to organise the profession, to reduce certain costs and delays in post-production and to guarantee freedom of creation. Digital technology is especially a boon for women who can more easily coincide their role as filmmaker, mother and wife. It is this feeling that enlivens Naky Sy Savané actress and promoter of the Ivorian festival, for whom this theme comes at the right moment, as digital technology is in the process of imposing itself.

The panel was moderated by Claire Diao, film critic, co-founder of the pan-African cinema AWOTELE magazine and director of Sudu Connexion.

The 5th African Women Image Makers Cinema Days (JCFA) held from March 2 to 7 in the capital of Burkina Faso. Like every edition, this festival gives pride of place to the training of moving image professionals. This year, the focus is on acting, film shooting and digital editing through two workshops. From 1-5 March 2018, at l’Institut supérieur de l’image et du son (ISIS-SE), about thirty trainees will familiarise themselves with or revisit the basic techniques in each of these sectors. The first training workshop on acting is delivered by Fabienne Bichet, professor of public speaking, and actir Ildevert Méda.

Shooting and Digital editing is conducted by Oumarou Kaboré of Media Africa, Jean Yves Nana of FESPACO and Paul JCFA Djibila of ISIS. For the content of the second workshop, Mr. Kaboré, who is one of the trainers, indicated that participants will attend theoretical and practical sessions. "We started with the theoretical aspects on the first day. We are going in the field for the next two days followed by editing sessions. And the content that has been produced will be presented at the closing ceremony, "he explained. Also, even if the digital has  facilitated the work of professionals, everything still needs a solid base, he added. More and more, we see women audiovisual professionals. Training is required to enable everyone to excel in her field.

A tribute to Aminata Ouedraogo at the JCFA 2018
Activist at the very beginning for the promotion of the woman in the audio-visual professions, Aminata Ouedraogo receives a tribute by her peers and the JCFA. On the eve of the launch of the festival, the women met with her in order to show their gratitude for all her actions. On this occasion, she received a present from the women filmmakers. The General Delegate of FESPACO, Ardiouma SOMA was part of the delegation to honour Aminata Ouédraogo. Even in retirement, she continues to share her experience with the younger generation in the Burkina Faso National Union of Women of the Image (UNAFIB). In addition to the films she made, Aminata helped in the organisational aspects of FESPACO and directed the film and television market.

The 5th edition of the Journées Cinématographiques de la Femme Africain de l'Image (JCFA): the theme “The African woman professional meeting the challenges of the digital age”. According to the responses of some professionals, this is a timely theme. Digital technology is a tool that should be of great assistance to women. Presently, women are in all sectors of cinema and we know that in everyday life, women work more than everyone else. It allows women to better reconcile their family life and their profession. For example, at the same time remaining within the household environment, she is able to run her business, organise her festival, send emails, do long-distance interviews and make video conferences. Digital technology can therefore be a contribution to the work we do if we know how to use it. There are many pitfalls with these technologies, which means we have to use them intelligently.

Melanie de Vales Rafael: "The nurse who wants to save the war-wounded in Le train du sel et du sucre "
Melanie de Vales Rafael, an actress for 8 years, made her break through on the screen in the role of Nuta in "The Republic of Children" accompanied by American actor Danny Glover. Since then, she continues filming in her country Mozambique in"Under the full moon", then in the film "The Train of Salt and Sugar" the opening film at JCFA 2018. "I am a nurse from a wealthy family living in the South. But when the war breaks out in the north of the country, I leave it with the hope of healing the war wounded, "says Melanie. In Ouagadougou, she is the ambassador for this film, directed by Licinio Azevedo who was nominated at the 2018 Oscars "The film was selected for this year's Oscars, but we did not have enough money to do the campaign. Still we are proud that the film was selected, even if in the end we were not among the finalists "she adds. Mozambican cinema is in its infancy, according to the actress, since a film is only produced every 4 years. "We have a great deal of growing pains with many challenges such as looking for funding." Optimism is allowed for this young actress who is also fashion model.

Apolline Traore wins awards beyond our borders
Frontières won Best Film in Los Angeles in the United States during the Pan African Film and Art Festival from 8-19 February. Apolline Traoré dedicated her award to Idrissa Ouédraogo who had just passed away. This is a reminder that through art, the festival creates a greater understanding among afrodescendants.

Her feature film uses as pretext the news of the opening of a pool in a popular neighbourhood and the fact that it is open only to women on Sunday, to show, with subtlety and mastery, a space of externalizing feelings and unveiling personalities.