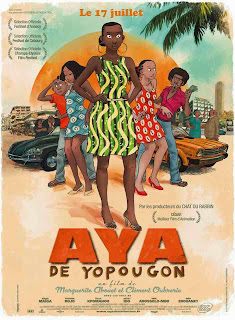 In the animation film, Aya de Yopougon, unveiled at the Annecy Film Festival, filmmaker Marguerite Abouet, author of the popular graphic novel of the same name, describes with tongue-in-cheek humour--avoiding all miserablism--a cheerful and modern Africa in a working-class neighbourhood of Abidjan.

At the preview screening of the film during the Annecy Film Festival, Marguerite Abouet, who lived in Côte d’Ivoire until the age of 12 years old, had this to say:  "When listening to the media, I do not recognise the Africa of my childhood, so I decided to show a version that is closer to the daily lives of Africans, which though indeed it does exist, does not focus on war or famine."

The animation film draws from the first two volumes of the graphic novel made in 2005 with graphic artist Clément Oubrerie, who is also the co-director of the film, to be released on 17 July. It recounts the life of Aya, a beautiful 19-year-old Ivorian who lives in Yopougon, a working-class neighbourhood of Abidjan in the 1970s.

A serious young woman who has ambitions to become a doctor, she is in total contrast to her two friends, Adjoua and Bintou who to her dismay, do extremely well in the categories : Hairstyles, Fashion and Husband hunting. The two girls, go dancing in the "bush", venture out to the dance halls, taking life easily, until the day that Adjoua, who is not married, finds out that she is pregnant.

In a serene atmosphere with warm colours seasoned with popular songs, the film attempts to describe the lives of an urban and modern neighbourhood where no matter the circumstances, everyone stays optimistic by relying on the solidarity among neighbours.

"While in the West the subject of paternity suits would be welcomed by psychiatrists, in Africa the problem is resolved in another manner, without wallowing in self-pity", Marguerite Abouet notes with a smile.

With elegant graphics and characters drawn with very simply lines the one-hour-thirty-minute film depicts a bustling city far from the pessimistic clichés about Africa. Here women are coquette, wearing the “dresses of Paris”, and the men, incorrigible womanisers, dressed in jeans while queuing up to get coiffed by the Michael Jackson look-alike.

Moreover, the feature-length film opens with a live-action advertisement showing beaming children, which boasts the benefits of a beer, whereas the second one promotes a bank.

These effects, which quickly set the tone of the film according to Clément Oubrerie, are relayed by the character Sissoko, a rich tycoon who made his fortune in the beer industry and who lives in a large mansion with swimming pool and marble surrounded by skyscrapers.

Similarly, the wise Aya, to which her friends come for advice, proves to be a self-confident young woman, independent and liberated, and who like most of the women in the film, plays a decision-making role in the family.

Even though it is optimistic, the film is not especially kind to its characters. With a direct tone where “everyone is hauled over the coals”, the filmmaker depicts Africans with ferocious humour. Women are venal, ready to lie in order to achieve a favourable outcome, and the men are cowards, who collect mistresses and are rarely present in day-to-day life.

I though that African men were going to jump all over me, but that was not the case, because they recognise that this was reality,” declares the young filmmaker, who hopes to release the film soon in Côte d’Ivoire.

African Women and Animation Cinema
Posted by Beti Ellerson at 21:38