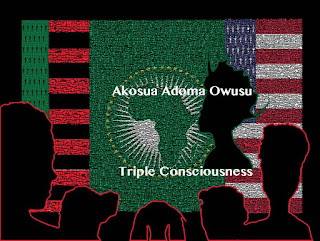 
The history of the American Negro is the history of this strife — this longing to attain self-conscious manhood, to merge his double self into a better and truer self. In this merging he wishes neither of the older selves to be lost. He does not wish to Africanize America, for America has too much to teach the world and Africa. He wouldn't bleach his Negro blood in a flood of white Americanism, for he knows that Negro blood has a message for the world. He simply wishes to make it possible for a man to be both a Negro and an American without being cursed and spit upon by his fellows, without having the doors of opportunity closed roughly in his face. 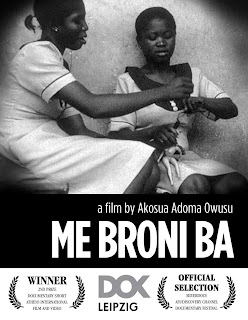 Her “warring consciousness” as she describes it, becomes the point of departure for her film Me broni ba (my white baby). Using hair as a medium of culture, she examines African and African-American identities and ideologies in an effort to resolve their differences.

Me broni ba is inspired by the experiences of Adoma’s sister who as a child was fascinated with white people’s hair, as well as her own observations, during her travels to Ghana, of girls using white dolls to practice hair braiding.  This relationship to the white doll raises the vexed question of the exportation and internalization of white standards of beauty in Africa. Thus a parallel to the triple consciousness among the African immigrant population—an “exteriorized consciousness” that Africans experience, though not in the context of assimilation but rather of interiorizing a western aesthetic leading to a similar double consciousness to which Dubois refers, in the form of an African/Western dichotomy.

In the United States, Owusu reflects a growing population of Neo-African Diasporans, whose experiences highlight a recent debate on the differences between African Americans and Africans in America; the former, descendants of enslaved Africans having endured the transatlantic slave trade and U.S. slavery, and the latter, diverse groups having largely migrated to the United States post-African independence and who constitute the “Neo-African Diaspora”.

Updated to include recent films.
Posted by Beti Ellerson at 17:16