Bridget Thompson: what shaped/shapes my i/eye 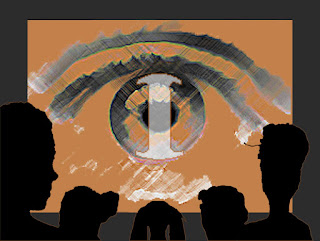 Bridget Thompson, a documentary filmmaker from Cape Town, focuses on untold stories and hidden history--as she journeys "out of the white cultural Bantustan into the wider black world intellectually, politically, socially, culturally and spiritually."

She began making films in the 80's in an attempt to reclaim stories and knowledge suppressed during Apartheid. Inspired by the African Cinema movement, she attempts to bring its aesthetics, principles and practices into her work. She devotes her time to the Art and Ubuntu Project, whose inspiration draws from the legacy of Ernest Mancoba, artist and intellectual.

In September 2007 Bridget presented  the paper "What shaped/shapes my i/eye" at the People to People International Documentary Conference. A personal, touching reflection on her evolution as an intellectual and filmmaker, at the same time a critical engagement with the cultural politics of filmmaking in South Africa.

"What shaped/shapes my i/eye" is republished here with her permission:

The student boycotts in June 76 and Biko’s death in September 77 triggered the most momentous shift in my consciousness. They propelled me to embrace and explore my own country and initiated a journey out of the white cultural Bantustan into the wider black world intellectually, politically, socially, culturally and spiritually. This wider black world gave my life meaning and coherence, filled it with richness beyond counting. My access to this world was only possible because of the graciousness of my guides on this journey, both black and white. A lot of this journey, but not all of it, was conducted through documentary film-making. Through documentary film -making and especially through the oral histories I have done with it I have learnt to know my country and to construct my own identity. This is inevitably still a work in progress.

This gathering is exquisitely painful for me because naively I’d expected that our struggle would lead to the paradigms of this wider black world that I was privileged to be exposed to shaping both our cinema and all the knowledge broking institutions of our society - on the contrary as a society we’ve gone the other way with an almost wholesale capitulation to commodity fetishism and all that that implies in terms of insertion into the international systems of western broadcast media.

I sometimes wonder whether our easy acceptance of the values of western media had its roots in our approach to the media during the struggle? During the struggle, most but not all, people in the progressive movements with film-making skills fed the international news media. This was no doubt a key factor in strengthening the world –wide anti apartheid movement but it was also a double- edged sword. Regretfully our paradigms of storytelling have been very influenced by the ways in which we ‘sold’ our struggle internationally via the mainly western media – where the spectacle of dead bodies of children beamed out internationally telling the story of pain, loss and brutality and we still somehow seem to need this external validation of ourselves, our stories, our pain and our history.

Of course this is not all we are as film-makers and since 94 there has been a fabulous coughing up of stories which reclaim history, identity and start to piece together a sense of a nation. We are grappling with our own heritage and history, sense of ourselves as a nation and our indigenous voice. In particular whereas in the 80s one could count the number of black South African filmmakers on one hand there is now a wonderful flowering.

Nevertheless the prevailing paradigms of debate have been limited and fragmented, often unaware of precedent locally and internationally and the insidious problem of spectacle still prevails in a number of different ways. There seems to be no discernible organised resistance or alternative to these prevailing values.

In recent years I have felt rudderless in my journey away from the cultural bantustan I referred to as the values Id hoped would prevail in the new South Africa seem to be a thing of a dim and distant dream.

At last however on a public platform in a meeting of film-makers we are raising the values expressed so freshly and poignantly by Biko and captured so well in Bheki Petersen’s keynote address and for this I am extremely grateful.

Biko is dead long live the spirit of Bantu Stephen Biko and BCM long live. I say long live BCM because I think is important for us to acknowledge that Bantu Stephen Biko was a bright charismatic person in whose life and thought and martyrdom were condensed the hopes of a generation but he did not walk alone and he stood on the shoulders of others – he above all people subscribed to the values enshrined in the proverb umuntu ngamuntu ngabanye abantu:

My first exposure to the foundation of Biko and BCM’s ideas was anecdotal. I stumbled upon some life stories which revealed facets of what I later came to realise was a large and long lived movement, the New African Movement characterised by Prof Ntongela Masilela as beginning in the late 1860s and ending with the end of the Sophiatown Renaissance at the end of the 1950’s. It is Masilela’s rigorous scholarship which joins the dots of our intellectual history and heritage and makes it accessible to us today but there is no doubt that in spite of the intellectual ‘naqda ‘that occurred in South Africa from the 1950s to the 1990s aspects of this heritage were handed down across generations and ideas percolated in a way that fed the development of the BCM inter alia.

The history of the ideas that have shaped our movements for change are extremely germane for us as social documentary film-makers and need to be the subject of our rigorous scrutiny. That is if we take the social in documentary film-making seriously. For example if we fetishise Biko as an individual hero (which no doubt he was) and exclude consideration of the fact that he was part of a social movement – if we also don’t have the courage to look at ourselves and how we were party to dissing the B.C.M and it’s ideas we have no right to celebrate Biko and can only engage his ideas superficially. A deep consideration of the BCM’s ideas about race for example, where whites were not accepted if they self identified as white but were accepted if they identified as Africans may be seen to be extremely progressive then and now. However its not only the ideas of Biko and BCM, we need to take cognizance of all the debates and faultlines in our social movements going back as far as the debate between Tiyo Soga and Sandile 140 or so years ago for they have an impact on our society and relevance even up to today.

There is incredibly rich material for us as artists and filmmakers to explore especially if we are prepared to go outside the box and the prevailing norms and dig a little deeper than the expectations of broadcasters funders etc. I get nervous when I hear film-makers referring to making doccies. The word doccie always reminds me of pet dogs, lap dogs perhaps with a carefully coiffed presentation rather like a film which is formulaic, neat contained and doesn’t probe beyond the superficial and obvious.

On the other hand if we take seriously, Haile Gerima’s formulation of how film language is created in a discourse between producer, audience and critic then we do have a responsibility to acknowledge that our practice has societal relevance and is not something formulaic nor something we can build alone without consciousness of precedent and context. Haile's formulation helps me to ground my 'I' eye or my endeavors as a film-maker within a collective societal discourse such as it exists.

Given that we are working within an environment where we do have political democracy if not economic democracy and we havn’t yet fully reclaimed our intellectual and cultural heritage nor repaired the damage of 40 years of Christian National and Bantu education.

I believe that as social documentary film-makers we have an urgent obligation to contribute to this project. I fear that we wont be up to this huge and responsible task, that we will repeat ourselves, mimic the forms of tv discourse in the hegemonic western world and ultimately go into a cul-de-sac producing merely ‘doccies’ if we don’t take serious account of 3 things:

2. Our own intellectual history - in particular the 100 year history of the New African Movement

3. The rich and potent legacy of the African Cinema Movement – which may even encourage us to question the documentary form in its entirety  In consideration of these three legacies to which we are heirs, whether we admit it or not, I believe we will also review, develop and build the social in our practice and it is in this developing social aspect of our practice that I hope to find my I/eye before I die.

After the conference and my perception of the difficulties that a number of film-makers showed in awareness of their work in relation to history and historiography (eg simplistic comments like history must be subsumed to story etc.) I would add that some awareness of theories of history and indeed the history of history and how documentary feeds into this is also a pre-requisite for those documentary film-makers engaging historical questions. But then its also the role of critics and audiences to raise these questions thereby pushing filmmakers further on their path.