Amitie Code : Open call for ideas for the production of a web-series on migration, development and human rights 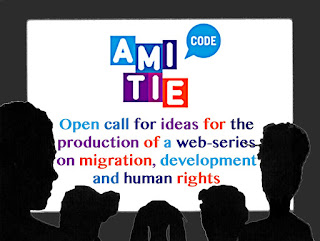 Amitie Code : Open call for ideas for the production of a web-series on migration, development and human rights

The partners of the European project AMITIE CODE launch a call for ideas for the production of a web-series on migration, development and human rights.

The web series will be divided into 6 episodes to be filmed in the partner cities of Bologna (IT), Toulouse (FR), Hamburg (DE), Riga (LT), Loures – metropolitan area of Lisbon (PT), Seville/Andalusia (ES) and focused on:

1. The unequal relationships between developed and developing countries;

2. The global interdependency that causes every action (including individual consumer choices) to have an impact on developing and emerging countries;

3. The importance of Africa's development for nowadays Europe;
4. The results of the development cooperation, and in particular of decentralized cooperation;

6. The human rights standard and the impact of responsible consumption.

The selected idea/project will be awarded €65.000.

You can find further information on the call and the forms to participate on AMITIE CODE website www.amitiecode.eu.

All forms and all the other requested material must be sent via certified e-mail to protocollogenerale@pec.comune.bologna.it  by the 1st of September 2016.