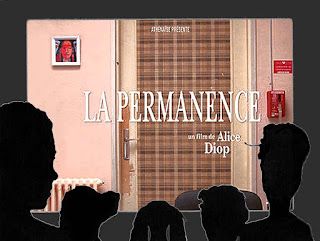 In competition at the Cinéma du Réel Film Festival in Paris (March 2016) where it received the Institut français Louis Marcorelles Award, On Call is a film that makes a difference and is necessary as an increasingly fearful Europe faces the influx of refugees and migrants.
In a small doctor's office, a fixed camera is placed on one side or the other of the room, allowing either the practitioner or the patient to be seen. How is it that the viewer remains glued to the screen for more than an hour and a half with such a minimalist approach? Glued, moved, in total empathy with those men and women, their pain, their suffering?
No doubt, it is what Alice Diop felt from the impact of hearing about these dramatic experiences that speak of the terrible evolution of a world where violence has become commonplace.
Initially her feelings, which she aptly conveys to us without pathos but with the meticulousness of her craft, become our own. She is discreetly present, as is her sound engineer, whose hands, at one point, are in view at the edge of the screen in an attempt to put a smile on the face of a baby, whose mother weeps an intimate drama caught in the drama of History. They are not trying to conceal themselves. A patient looks at them, asks them: "Are you still here? Do you go to other hospitals or just this one?" He admires the work of the boom operator: "All day, it's heavy!"
As in a film by Chantal Akerman, time is an asset. A static shot of a wall, a door, a chair and the top of a desk, compels us, in terms of duration, to focus on the details: the dilapidated walls, the oldness of the equipment. We are at the public hospital. This doctor, who has a sense of irony, notes that because of the lack of funds, there is a shortage of prescription pads.
This doctor is one of these modern heroes, anonymous and invisible, who give themselves to their task, with the means available. Assisted by a psychiatrist and a social worker, he maintains the PASS, a basic service with continuous access to health care at Avicenne Hospital in Bobigny. The only one in Seine Saint-Denis that offers consultations without appointment for newly-arrived migrants, often without social security and pending administrative decision on their status in France. When a refugee gets asylum, he or she is happy, though it is rare to hear: "This is a new life, everything will go well now!" And immediately tempered by: "Well, almost."
We spend an hour and a half with the doctor and the stream of patients, some of whom become familiar to us. Concentrated, the doctor listens to their hopes, often concerning a certificate necessary for the next step, or drugs that may distance them a bit from their suffering and their anguish. Entering through this little door, waiting patiently in the austere waiting room, are the effects of the harshness of the world, seen far beyond the door. Marked on their faces and visible in their gazes and silences is the precariousness of their situation in France, often without income or housing, lacking sleep as they are forced to slumber in parks, and the traces of the violence that they have fled. We cannot accommodate all the misery in the world? Perhaps not, but how are we doing our part, we who have historically provoked the largest global division of wealth and power?
In his broken English or Spanish, the doctor communicates somehow with those who have not yet learned French. Neither superiority nor condescension in his relationships. And especially not a belief of what is or should be the Other. In his presence, his comments, his questions, while continuing respectfully without a judgement of otherness, he positions himself as an alter ego, as a fellow human being. When a lady living at Emmaus (1) shows her fingers deformed by osteoarthritis, the doctor responds: "I have the same thing, I'm old also, we're the same age!"

Six months of editing: there is a rhythm, which takes the time to listen, marking the pauses with fades to black, followed suddenly by faces with dark circles under the eyes, an inexhaustible river of pain, other lives, other stories. One senses the dizzying magnitude of the task. The health providers oblige admiration. Two thousand consultations a year. They are not young. They have seen a lot, heard a lot, do not have time to waste on what they know will be fruitless revolts against the administration. No prescription ledger? They manage. No room for a private conversation with the psychiatrist? They make do. In an emergency, though not keen to do so, they prescribe antidepressants, anxiolytics, sedatives. Though an inadequate response, it is the only solution available.

At the end of the film, Alice Diop thanks the patients who accepted her presence. She had explained to them what her approach would be, which was the appropriate thing to do! It was while researching for the magazine Egaux mais pas trop [translation : equal but not too much] (LCP-AN channel) on the process of accessing care for the poor that she discovered Doctor Geeraert’s practice. She returned every Friday for a year.

Highlighted in the film is a quote by Fernando Pessoa: “They spoke to me of people, and of humanity. But I've never seen people, or humanity. I've seen various people, astonishingly dissimilar. Each separated from the next by an unpeopled space.” To see On Call is a therapy against the reflexes of exclusion arising too quickly faced with the constant battering of the audiovisual. It is the opposite experience of the flux of refugees presented on television: every man, every woman is unique, because the physicians respect them and share with them, because a filmmaker poses her camera without preconditions, to listen to them. Simply, as human beings.

Alice Diop: "It is up to us to work on our own complexes" by Olivier Barlet
Posted by Beti Ellerson at 15:40