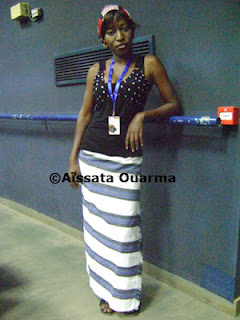 Aïssata Ouarma, laureate for the best script at the Festival Ciné Droit Libre in 2010, for the documentary film Le Silence des autres (The Silence of Others) discusses her film and the troubling phenomenon on which it focuses: the outflow of young girls from the village who go to the city to be employed as domestic workers.

Aïssata, talk a bit about yourself and how you came to cinema.

I did a masters in Art, Management and Cultural Administration with a focus on Dramatic Art at the University of Ouagadougou. Throughout my undergraduate studies I was very interested in documentary scriptwriting but did not have any idea of how to go about it. I sought out a film school, but to my dismay I found out that I could not attend because it was beyond my means. I frequented film students and read their scripts to have a notion of scriptwriting. In 2009, for the first time I was able to participate in a one-week training workshop in scriptwriting at the French Institute. The same year, I entered my project entitled “Between a rock and a hard place” in the Festival ciné droit libre’s best documentary film competition under the theme Human Rights and Freedom of Expression. My project, which focuses on the consequences of divorce on children (which I had a particular interest regarding my own family), was among the first three in the competition, but it did not win the first prize. In 2010 I returned with the script for Le Silences des autres, which deals with the experiences of young girls from my region who go to the capital to be employed as domestic workers. This time I obtained the first prize. 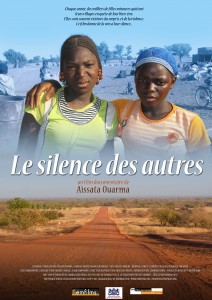 How did you become interested in the theme about maids from the countryside who go to the city to find work?

The interest came about from my concern regarding another problem, the lack of water in my village. In 2006, I sent an inquiry about the possibility of a Flemish collaboration for a water pump in my village and in 2007 it was granted. Unfortunately, the representative in Burkina who handled the project did a poor job. While the pump does exist, it is mere décor in the village, as not one drop of water comes out of it. So I started writing a script about the water problem but while researching for locations I realised that there was a much more serious problem: the outflow of young girls towards the capital. Therefore, I decided to focus on this issue and wrote a script about this flight and exploitation of girls at the same time evoking the water problem at the start of the film. In my village there are practically no nine-year-old girls, they have all gone to the capital to work as maids.

The film was awarded a prize at the Festival Ciné Droit Libre in 2010, in what context does the film represent the defence for human rights?

The film defends human rights in the sense that the childhood of these young girls is sacrificed with the complicity of their own parents. They are first exploited in the village by an intermediary who receives 10, even 14 percent of each sum paid. At each police checkpoint, the sum is doubled, considering that the girls are minors. And when they arrive in the capital, since they do not have any identification, they are often exploited by those who lodge them as well as by their employer.

The Terre des Hommes Foundation also played an important role in the film and in its production. The film was screened in various locations, especially in Ouagadougou. What impact did it have in raising awareness about the plight of these young girls?

Before I submitted my project for the competition, I participated for ten months in meetings that the foundation organised for the girls and when I was awarded the first prize, the representatives of the foundation promised to contribute to the production of the film and they kept their promise. Having participated in the meetings allowed me to be able to film more easily as the girls had more confidence.

Today many people now know that these girls are protected by structures such as the NGO Terre des hommes. After my film, this same NGO made public service announcements (PSA) to raise awareness to fight against the exploitation and mistreatment of maids. My film, as well as these PSAs, are broadcast often on the national television.

Is a goal also to raise awareness among the villagers who have preconceived notions about the city?

The first objective of the film is to raise the consciousness of the parents who allow their girls to leave and who without doubt will never see them again, and to dissuade the girls against this future, which they hope will be better in the city.

I was touched by the sadness of the families who were waiting for news from the daughters, who, now in the city, appeared to be rather lost. I was also shocked to hear of the physical and psychological abuse to which the girls were subjected. And what troubled me the most was Sali Ouattra’s statement: “When a woman hires a girl, sometimes she sees her in another manner, as if an animal, as if the girl does not have the same blood as she, as if she is not a whole person.” It is quite unbelievable that a woman could behave in this manner towards another person, a young girl! This need for power could push one towards inhumane acts! I imagine that there were things that you discovered during your research which for various reasons were not included in the film…

There were a lot of things that I wanted to say but because of the 26-minute timeframe for the documentary, I could not. For example, the girls’ fear and anguish as they awaited their new employer. The majority of the employers discuss the girl’s salary in terms of her physical strength and as soon as the financial arrangement is made she is taken away; as if at a cattle market. Rarely do they find a welcoming family, often they are sent into a hell. And also most of the girls were interviewed with their employer present and were limited in their responses. I could not show the invocation of the divinities called to protect them before they left the village. If another producer shows interest in the film, I would like to make a feature-length version.

I have another project on sexual rape of minors and I am looking for a producer. I will also attend a scriptwriting workshop in Senegal in October on a project that I began during a first residency organised by Africadoc; twelve countries will participate. I have already assisted a French documentarist and I hope to work again with other filmmakers to get more experience. I am available to work with all who may be interested.

Éléonore Yaméogo’s film, Paris mon paradis, (Paris, my paradise) focuses also on the dreams of people to go elsewhere to improve their situation and that of their family. Do you see a connection between these two situations?

The flight from the rural sectors and immigration are two phenomena that in the end describe the same reality, because in the two cases those concerned depart from their villages or their countries leaving family and friends behind as they search for a better life, but very often their dream is transformed into an absolute nightmare.