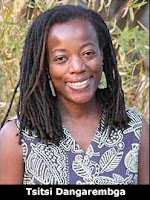 Intellectual, writer, filmmaker, producer, culture critic, Tsitsi Dangarembga created the film production company, Nyeria Films based in Harare in 1992. Founder and director of the International Images Film Festival for Women, she is also a member of Women Filmmakers of Zimbabwe.

Synopsis of the film, I Want a Wedding Dress

I Want a Wedding Dress is the story of young Kundisai Sande, who desperately wants to get married but finds herself in a sexual network with disastrous consequences. Her boyfriend Teri deserts her, only to find himself in the same sexual network. Mahachi, the successful, promiscuous businessman who seduces Kundisai, brings infection to the marriage bed. In the midst of their misery, the players in the sexual network come to realise that only love can conquer all.

Tsitsi Dangarembga talks about her evolution as writer to filmmaker and her experiences working in both media.

For me the important thing is to communicate.  If I feel I want to say something, then I want to say it.  It just depends on what the situation is, maybe what the idea, what the context is, as to whether that comes out as a play or a poem, a novel or a cinema script.  I decided I would go to film school and that is what I did, really.  I didn't go to film school with a sense of changing medium.  I discovered that when I got there.  I realized that it was quite different from anything that I had done before and I really realized that I needed to focus on that because I had a background in poetry, drama and prose.

I am very happy with that skill especially because I think it reaches more people more easily. To understand a film you don't have to be educated to the same extent where you do when you have to pick up a book.  I write in English so if I am thinking of a Zimbabwean public it would have to be people who can read in English and that isn't everybody.  Whereas even if a film is in English, I think if it is made well enough, a person can probably understand what is going on.

I think that both media have their advantages for me...I am very happy with having the options, different ways in which I can talk to different people and different ways in which I can express things.  Because I do not think that any story is ideal to any medium.  I think that particular stories are more readily communicated in particular ways.  For example, you have community theatre which is a wonderful way of communicating the problems of a small closely knit group, a community.  Which may not be the best kind of material for a film.  Or other kinds of drama.  So I am glad to have expanded my repertoire of communication skills.

As far as marrying literature and screenwriting and the production of films, I don't think they need to be married at all.  What actually happens is that in their individuality they compensate.  Because while I enjoy the intensity and the seclusion of writing, whether it’s prose, whether it’s a screenplay, I don't like to have to live like that all the time. So by the time I spend some time in seclusion writing something, the social animal needs to get out and be with people and so it really is good for me to have a film project where I can go out and spend lots of time interacting intensely with people.  So they compensate very well but I think that they are quite well compartmentalized now.  And I don't have to worry about interference.  It's not that I have to think about writing prose when I sit down and write a screenplay, and it's not that I have to think about developing the prose when I sit down to write literature so that's an interesting development, but it has been a struggle.

When I am writing a screenplay I don't think about the technicalities, I think about the story I want to tell about in these pictures and I write those pictures down. When I go back to producing it then I think, "oh my goodness how am I going to do that? Is that possible or not?"  But I do not let that censor me during writing and I think that is very important, actually. I think it is a problem that many people who work in the film business experience in that you do know these things and they do tend to interfere with the creativity.  But I think it is part of learning the skill of screenwriting, not to let it interfere, and to be able to write down the story as it comes and then know that turning this story into a film with all the technical problems is something that will happen latter.  But it doesn't happen while you are putting that story on paper.
Excerpts from an interview with Tsitsi Dangarembga by Beti Ellerson

Tsitsi Dangarembga Reflects on the First Decade of the International Images Film Festival for Women
https://africanwomenincinema.blogspot.fr/2011/12/tsitsi-dangarembga-reflects-on-first.html