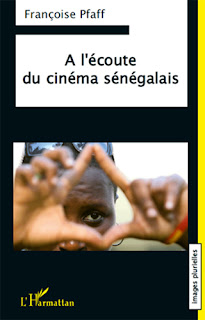 Straight off the press, published in French, A l'écoute du cinéma sénégalais (L'Harmattan: Images plurielles, 2010) by Françoise Pfaff may be loosely translated as "In tune with Senegalese cinema."

"This book depicts the state of Senegalese cinema some 50 years after its emergence through the works and voices of 22 filmmakers representing various generations and different cinematic trends. Who are these men and women behind their cameras? How do they live? What do they think? What are their resources and methods of work? What role have they chosen to play in the unraveling of time and an ever-encroaching globalization? How will they develop their cinema while asserting their socio-cultural uniqueness? How do digital technologies influence their trade? How will their films serve as memories for the future? Are their aspirations and challenges essentially Senegalese or are they to be found on an African or even worldwide scale? What does the New Wave of Senegalese directors have to say? How do they compare with their elders?

With seriousness and sparks of biting humor, these film practitioners speak about their training, the themes and aesthetics of their works, as well as matters of production and distribution. In doing so, they illustrate the wealth of their cultural matrix and reflect a humanism which is both lucid and generous. The issues on which they focus are of interest to people versed in the arts, history, sociology, anthropology, politics and economics."

Born and educated in Paris, Françoise Pfaff is Professor of French and Francophone Studies at Howard University (Washington, DC.), where she also teaches courses on literature and film from France, West Africa, and the Caribbean. She has published numerous articles and four books on African cinema: The Cinéma of Ousmane Sembène, A Pioneer of African Film (Greenwood Press, 1984), Twenty-five Black African Filmmakers (Greenwood Press, 1988), Focus on African Films (Indiana University Press,  2004), and A l’écoute du cinéma sénégalais (L’Harmattan, 2010). She is also the author of a book on the Guadeloupean writer Maryse Condé entitled Entretiens avec Maryse Condé (Karthala, 1993), which she translated into English as Conversations with Maryse Condé (University of Nebraska Press, 1996).


Also on the African Women in Cinema Blog:

The "regard croisé” of Françoise Pfaff: Pioneer of African Cinema Studies in the United States
Posted by Beti Ellerson at 16:40