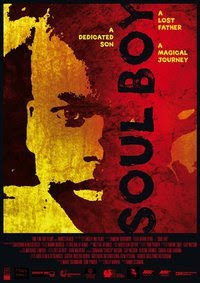 Soul Boy, written by Kenyan author Billy Kahora, evolved from a film workshop initiated by the German association One Fine Day with filmmaker Tom Tykwer. Shortly into the film production, Ghanaian-Kenyan Hawa Essuman undertook directorship with Tykwer as her mentor. The film Soul Boy is the result of this mentorship and collaboration.

Nairobi, Kenya. 14 year-old Abila lives with his parents in Kibera, one of the largest slums in East Africa. One morning the teenager discovers his father ill and delirious. Someone has stolen his soul, mumbles the father as he sits huddled in a corner. Abila is shocked and confused but wants to help his father and goes in search of a suitable cure.Supported by his friend Shiku who is the same age as him, he learns that his father has gambled his soul away in the company of a spiritual woman.

The teenager doesn’t want to believe it and sets about looking for the witch. When he finally discovers her in the darkest corner of the ghetto, she gives him seven challenging tasks to save his father’s lost soul. Abila embarks on an adventurous journey which leads him right through the microcosm of his home town.

SOUL BOY is set in Kibera, one of the largest slums in the African continent, in the middle of Nairobi, Kenya. Kibera is a chaotic slum-city built out of temporary housing and is infamous for its high level of squalor. Children have to grow up quickly here as they learn to fend for themselves. Suspicion and fear still lingers as the Luo and Kikuyu communities recover from the 2007/2008 post election violence which saw neighbour turn on neighbour. Despite all of this the cohesion and the dignity of the people who live here is remarkable. Alongside the day to day tension, the social environment is dominated by a universal solidarity and common desire to maintain a working community.

In September 2008 Marie Steinmann and Tom Tykwer teamed up with Ginger and Guy Wilson (from the Nairobi based production company Ginger Ink) to set up a project which would build on the work of their One Fine Day association and the British NGO partnership Anno’s Africa – both of which have specialised in developing creative opportunities for those working in developing countries.

Operating within the framework of a manageable budget, the project was intended to develop a film workshop in Nairobi. Led by Tom Tykwer, a small team of professional filmmakers would create a feature film in Kibera by working together with a much larger crew of young local apprentices. The first goal was to integrate Nairobi’s residents, especially the slum inhabitants, those who were curious and wanted to learn the practical skills offeature film making, so that they could learn technical skills which would create job prospects and leave inspiration in the communities.

The project quickly developed its own dynamic energy. The Kenyan author Billy Kahora outlined the idea for a film, which translated the secrets and myths of this multilayered social microcosm into a modern, inspiring fairytale-like story: Soul Boy. The young Ghanaian-Kenyan filmmaker Hawa Essuman (born in 1980) took over the directing reigns. Soul Boy is her film debut, having worked successfully in local theatre. In the meantime she is developing her second feature film, which is set on the coast of Kenya. Following an intensive period of research in Kibera the screenplay took approximately six weeks to complete. Casting the film was spread out across the whole city: with the support of Anno’s Africa, the production searched for their young lead actors in Kibera’s slums, schools and alleyways. One week of pre-production was all that remained to prepare for the 13-day shoot. Soul Boy was finally shot between 17 November and 1 December 2008.