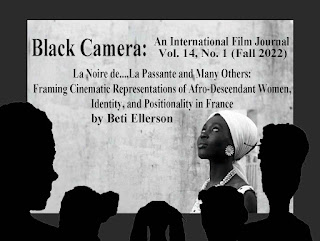 BLACK CAMERA
La noire de…, La passante and Many Others:
Framing Cinematic Representations of Afro-Descendant Women, Identity, and Positionality in France
by Beti Ellerson
Volume 14, Number 1, Fall 2022, pp. 334-348
Abstract
The influential film La Noire de… by Ousmane Sembene released in 1966, offers a range of themes for a discussion on afro-descendant women and their myriad experiences in relationship to France. The project that this article undertakes encompasses the period around the time of its release to the present. The challenge that it lays for itself is imbedded in a caveat posed as a question: What does the title even mean in the context of a “France” and more particularly a “Paris” that is often viewed as a “fantasy,” but is a real, concrete place—with its contradictions and faults, promise and hope? Who is this discursive cohort of afro-descendant women—negotiating their place in the country/the capital: as student, expatriate, citizen, first-generation diasporan, third-culture “glocal” transplant, traveler, immigrant, migrant? The films selected to problematize these questions set the framework for this discussion.
- Negotiating In-Between Identities
- Multiculturalism and French Universalism
- Afro-Descendant Women, Film Activism, and Representation
- Sarah Maldoror: Linking Generations
Published by Indiana University Press
URL: https://muse.jhu.edu/article/861216
Posted by Beti Ellerson at 01:53