Rokhaya Diallo : Où sont les Noirs ? (Where are the Blacks?) 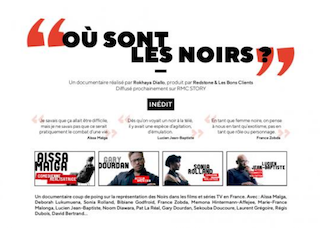 Rokhaya Diallo : Où sont les Noirs ? (Where are the Blacks?)

Excerpt of interview with Rokhaya Diallo by TV5Monde (translated from French).

This documentary was born from an original idea of producer Richard Koné and journalist/radio producer Ali Rebeihi.

Since the beginnings of French cinema, blacks have been used in the media for the perpetuation of prejudices that targeted them and of which they are the victims. [For instance] the clown "Chocolat" during the period of the Lumière brothers, who was already presented as a figure to be ridiculed. And these representations continued from decade to decade.

The representation of Josephine Baker, as hyper-sexualized woman, or of blacks on the cinema or television screens, as well as in advertising, as grotesque and ridiculous.

We interviewed intellectuals, film and television actors and actresses of cinema, those who make the images, those who critique and study them, such as Marie-France Malonga and Régis Dubois.

The idea was to make an inventory and to propose solutions.

Où sont les Noirs ? (2020), a documentary by Rokhaya Diallo, produced by Redstone & Les Bons Clients. With the participation of: