Ugandan Eleanor Nabwiso, laureate of the African Focus Award for her film "Bed of Thorns", a film raising consciousness about gender-based violence against women 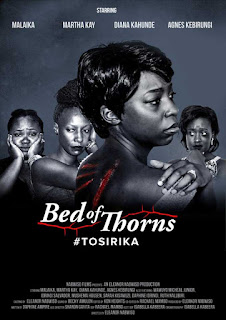 Ugandan Eleanor Nabwiso, laureate of the African Focus Award at the 2019 London ArtHouse Film Festival for her film "Bed of Thorns", a film raising consciousness about gender-based violence against women.

The film, produced and directed by Eleanor Nabwiso was made with an all-women crew.

"I want to put out more films about gender based violence in detail… The cultural norms in Africa believe that men should beat their wives, to show that they love them, or that a woman is beaten because she is guilty of something… A man beating his wife is wrong, not just in Africa but across the world. The message from this film is: 'don't keep quiet'... We call it 'bedroom matters', if you are fighting with your husband keep it in your bedroom…and when you come out of the bedroom, smile to the world, this is wrong, speak out, tell someone about it. (From BBC interview: https://www.bbc.co.uk/programmes/p07qzj3s)

Bed of Thorns follows the story of Stella who is getting married in a few weeks but friends around her know she is being battered by her fiancé and their aim is to stop the wedding from happening. All of her friends are actually undergoing domestic violence from emotional abuse, physical abuse, bullying, and rape.