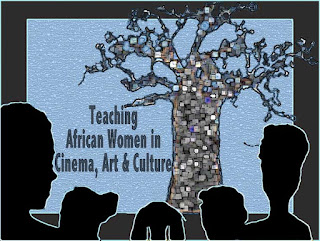 In this part I focus on introductory sources that frame theoretical and critical practices of interpretation and contextualise women artists’ multiple experiences. How visual representations of African women, especially in cinema are theorised and problematized, and how theories and critical inquiry on African women in cinema have evolved. The presentation of the film Sisters of the Screen: African Women in the Cinema, has been a useful tool for me to structure the course, as a means for women themselves to talk about their experiences with cinema—Beti Ellerson, August 2014

A few publications have been available in the last few years that serve as primary texts in the study of African women in cinema, notably the special issue of Journal of African Cinemas: Celebrating 40 years of films made by women directors in francophone Africa and Feminist Africa: African Feminist Engagements with Film, both issued in 2012. My contributions to both journals served as readings for the discussion on theoretical and critical practices of interpretation. In both articles, “Towards an African women in cinema studies” in Journal of African Cinemas, and “Reflections on cinema criticism and African women” in Feminist Africa, I probe the tenets, critical debates and developing trends in what has evolved as a veritable African Women in Cinema Studies. Essential to this discussion is its vital role in the history of African cinema, Women’s Studies and film criticism.

In the introductory week of the course, the students presented a short overview of their assigned countries in order to become familiar with or give a review of the historical contexts of the vast continent of Africa.

Under the theme, Women Artists’/Filmmakers' Voices the class had a glimpse at historical, political, and cultural events of African societies through the eyes of their women cultural producers, featuring Safi Faye (Senegal), Tsitsi Dangarembga (Zimbabwe), Fatou Kandé Senghor (Senegal) and Rina Jooste (South Africa). The readings included: “Safi Faye: Africa through a Woman's Eyes: Safi Faye's Cinema” by Beti Ellerson, in Focus on African Films (Indiana University Press, 2004) by Françoise Pfaff, interviews with Tsitsi Dangarembga and Rina Jooste, and the translation from French of an autobiographical narrative by Fatou Kandé Senghor. The choice of the women was guided by my interest in highlighting the interdisciplinarity of African women artists’ lives, how they work at the intersection of multiple experiences. Safi Faye is a filmmaker and anthropologist, at the same time she blurs the boundaries of the documentary and fiction. Tsitsi Dangarembga is a filmmaker, writer, cultural activist, and organizer. Fatou Kandé Senghor is a multi-media artist, connecting the borderlines of filmmaking, performance, plastic arts, music—including hip hop. Rina Jooste, a musician turned filmmaker, and in turn historian, brings together these elements to deal with the difficult, storied history of South Africa, and in particular Afrikaner experiences and identities.

Students, thus, are exposed to the concept of African women in cinema as an expansive, outward-reaching entity, and from the beginning of the course, experience Africa as a vast continent with plural histories, cultures, languages and identities, and African women artists as complex and multidimensional human beings.