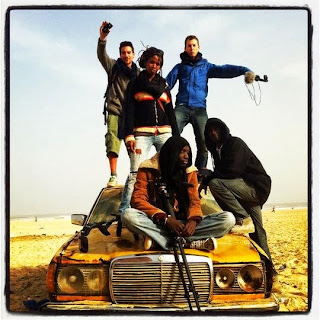 
A conversation with Rama Thiaw and Beti Ellerson, May 2013.

Rama Thiaw, born in Nouakchott, Mauritania, is author, director and producer at Boul Fallé Images, a Senegalese film production company. Mauritanian and Senegalese, she grew up between Senegal and France. After obtaining a Master's degree in International Economics at the Sorbonne, she gravitated towards cinema receiving a diploma in filmmaking at the University of Paris 8 and after, a Master's at the University of Paris 3 at Censier Daubenton.

Rama, you are in the middle of the production of the film titled, "The Revolution Will Not Be Televised" which appears to be inspired by the late Gil Scott-Héron. What motivated you to make this film?

The film "The revolution won’t be televised" is in fact a tribute to Gil Scott-Heron. In the note of intention of my film, I give the reasons that motivated me to make the film as follows:

"Far from the images that journalist present in the media, in my documentary, "the revolution will not be televised", I want to film them as they are, Romantic beings. In their 'Actions' as activists in the service of the People, and in their 'Dreams' as they return to the stage as poets-musicians."

"In the 1980s, Senegal was dominated by an unnamed dictatorship. The man who stood against this system, Maître Abdoulaye Wade, decided to establish political liberalism. However, after he was elected, this hero quickly became worse than his predecessors.

My film begins on January 17, 2012, at the end of the Senegalese legislative campaign—12 years after the presidential election of Maître Abdoulaye Wade.

During this same period, Thiat and Kilifeu, members of the Keur Gui Band, decided to take action where the socialist opposition failed to do so. They mobilised and created with other friends--musicians, artists and journalists, a peaceful and apolitical group called ‘Y'en a marre’ (We’re fed up).

They organised marches and demonstrations to ensure that the Constitutional Council would revoke the candidacy of the outgoing president. The mobilisation was unprecedented. The recently-roused opposition joined the young artists of ‘Y'en a marre’. United under the banner of the M23, they stood up to the former man of law who tried to usurp the democracy of 10 million Senegalese.

In this atmosphere of revolution, using direct cinema, I filmed Thiat and Kilifeu, the two protagonists of this citizen uprising. But President Wade did not want an African Spring to happen in Sub-Sahara Africa. The rebellion had to be stopped before it spread. Between threats and intimidation, in and out of prison, and bribery attempts, I followed these two musicians in their daily lives. Through interviews facing the camera, they shared with us their feelings about their commitment and their sudden media attention, but also their doubts after the arrests. Far from highlighting only these moments, I wanted to understand the origins behind their behaviour, which is why I decided to give an intimate portrayal as well. Throughout the first part of the movie, I show how one lives a revolution from day to day, with all the dangers, uncertainties and joys it brings."

You are using a crowd-funding strategy at Kisskissbank, why this choice?

In fact, the crowd-funding idea is two-fold. One, it is to talk about the film in order to get an opportunity to find a distributor and to get visibility in the theatres. And as I am also a producer, I went into debt to do the first 8-week shoot with a 6-person crew in addition to myself. Initially I intended to do fundraising on a US platform but I don't live in the United States so I couldn't. It is also for this reason that we have an English-language version because I think that this film would interest an Anglo-Saxon public more so than a French one. Because these themes are rather far from the audience in France, and besides, events that take place in Senegal get very little media attention. Therefore, there is still a long way to go, since I must go back to shoot the second part before editing the film.

Links
Berlinale 2016: The Revolution won't be televised by/de Rama Thiaw
Rama Thiaw, A Young Filmmaker in the Struggle
Posted by Beti Ellerson at 19:27