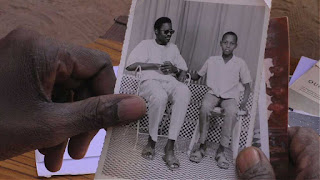 In her quest to piece together a past of a father she barely knew and reclaim his place in Niger’s official history, the director of this personal documentary candidly poses the question: “Who still remembers Abdoulaye Mamani?” A 10 year filmmaking process involving in-depth research and interviews reveals that while Mamani is perhaps best known for his literary contributions as a poet and novelist, he was also a righteous trade union organizer, journalist, and dynamic politician with a lifelong commitment to the freedom and independence of his country.

Filmmaker Amina Abdoulaye Mamani, joins filmmaker and producer, Mamadou Niang in a conversation about the film
https://www.youtube.com/watch?v=Il5aOzk1Ji0
Posted by Beti Ellerson at 03:32