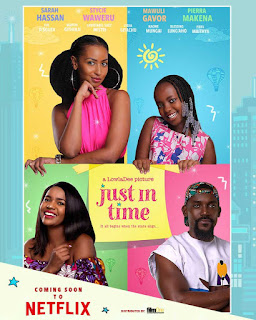 Dolapo Adeleke's Just in Time on Netflix
Just in Time, written, directed and co-produced by Nigerian filmmaker Dolapo "LowlaDee" Adeleke, premieres on Netflix in March 2021. The comedy drama, shot in Nairobi, features Kenyan actress, Sarah Hassan who is the producer.
Dolapo Adeleke directed the popular romantic comedy Plan B, broadcast on YouTube as a Valentine Movie Special in 2019, produced by Sarah Hassan.
In 2016 she directed her first mini-series This Is It, bringing together a Nigerian and Kenyan cast. With YouTube as its broadcast platform, it has garnered millions of views.
Dolapo Adeleke is the CEO/Founder of LowlaDee Originals Inc. and the Cofounder of Giraffe Productions, Nairobi.