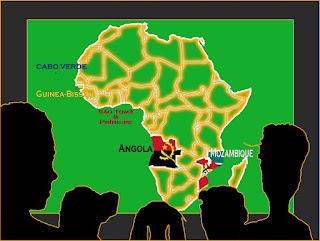 Sarah Maldoror, was the first woman to do a film. The first film about Angola was made by a woman, there was no cinema before this. It was against colonialism, it was a very political cinema. It was a cinema that was found in the working-class districts--Pocas Pascoal

Women's presence in cinema, visual media and screen culture in Lusophone Africa dates to 1972 with the work of diasporan Sarah Maldoror. The screen cultural practices of women working in the Lusophone African diasporas, notably Angolan and Cabo Verdean continues into the present.

French Guadeloupian Sarah Maldoror, both on a personal and professional level, has been closely connected to Africa. A politically engaged filmmaker, she directed three films focusing on Africa, notably the internationally acclaimed Sambizanga (1972), the first film about the Angolan liberation struggle. In her personal life: she was married to Mario de Andrade, Angolan writer and one of the leaders of the Popular Movement for the Liberation of Angola (MPLA). Both film scholars and cinema professionals attest to her influential contribution to Angolan cinema, African lusophone cinema and African cinema in general. In 2011, Sarah Maldoror received the National Order of Merit from the French government for her contribution to culture. She was honoured in this way:
Dear Sarah Maldoror, you are an outspoken rebel, a fighter of injustices, a resolute humanist. Throughout your career, through the lens of your camera, you have always fought in order to tell and present, realistically and poetically the harshest of realities. For all of us, your perspective of the memory of slavery and colonialism has a distinct value. On behalf of the President of the Republic, we declare you a Knight of the National Order of Merit. Togolese filmmaker and international lawyer, Anne-Laure Folly who was mentored by Sarah Maldoror, made a film that was also set in Angola, Les oubliées (The forgotten women, 1996), which  gives voice to the Angolan women left to deal with the ravages of the civil war. Anne-Laure Folly had this to say about Sarah Maldoror:  Sarah…inspired me to do [Les oubliées]. She made a film called Sambizanga, which in my opinion is one of the masterpieces of African cinema. When I saw it, I had a desire to make a film thirty years later, about Angola. She cleared the way by showing the Angola war interpreted from the perspective of a woman. My approach is not a pioneering one; she has already done that.” Though neither Sarah nor Anne-Laure is Angolan, they share a pan-African vision, and a commitment to the history of Angolan struggle and in particular to women’s experience within it. In the beginning quote, Pocas Pascoal describes Sarah Maldoror as a role model for Angolans. Emerging among the next generation of Angolan cinema, she too is a first, as a pioneering camera operator. She directed the feature film Alda & Maria (2011), continuing the representation of women and war in Angola. Set in 1980, it follows the experiences of two sisters, 16 and 17 years old, as they attempt to reconstruct their lives in Lisbon after fleeing the civil war in Angola. To add to the gallery of pioneering women, Angola-born Maria João Ganga, is the first Angolan woman to make a feature film, Hollow City (2004).

The contribution of the Cabo Verdean diaspora has been invaluable to Cabo Verdean film culture and African cinema in general, notably the scholarship of second generation Cape Verdean American filmmaker and scholar Claire Andrade Watkins. Moreover, women of the Portuguese Cabo Verdean diaspora have collaborated on and directed a few films, and as film activists, are involved in African film festival planning and programming. Portugal-born Isabel Moura Mendes was at the helm of the state-owned Cabo Verdean national television channel, TCV in 2004 and has been involved in the production of a number of African lusophone documentaries. In addition, she is a programmer for various film festivals and film events in Europe.

The diasporic practices of remembering through cinematic journeying, is prevalent among African descendant filmmakers. Such as Belgium-based actress, stage actor and filmmaker Babetida Sadjo, who directed the autobiographical film, Bafata. The film follows Babetida on her journey back to her childhood and her homeland, Guinea-Bissau, related as a personal tale in the form of a travel diary. Multi-faceted artist and cultural producer Vanessa Fernandes, of Cabo Verdean and Guinea-Bissau parentage, was born in the latter country and has studied, lived and worked in Europe, currently in Portugal, where she engages in afro-descendant discourse regarding both countries. Her first short film, Si Destinu (2016), was awarded Best Short Film at the Cabo Verde International Film Festival in 2016. Her trajectory is indicative of many transnational African women cultural practitioners, informed by their exilic, diasporic subject position.

Mozambican Isabel Noronha, at the same time one of the few, is the most visible woman practicing filmmaking in the country, and her contribution has been crucial to Mozambican knowledge production. In an interview by Max Annas and Henriete Gunkel (Gaze Regimes: Film and Feminisms in Africa eds. Jyoti Mistry & Atnje Schuhmann, 2015), she talks about the early history of Mozambican women of the moving images, noting the work of Fátima Albuquerque, who directed some of the first films in the 1980s. She observed that when joining the Instituto Nacional de Cinema (INC) in 1984, there was a cohort of women in diverse functions at the national cinema institute, working as production assistant, specializing in film lab developing, and in film distribution. She also emphasized that at the time, politically, there were strict rules regarding gender parity, hence discrimination was forbidden. Therefore, the politics of the epoch empowered women to participate, which led to the training of a cadre of women practitioners in the decade after the independence of Mozambique.

Psychologist, intellectual and multi-media artist Grada Kilomba, whose ancestral homelands are both São Tomé-Príncipe and Angola, was born in Portugal and is based in Germany. As many transnational cultural producers, she situates her work within the global African diaspora. In addition to her short films and video installations, she employs the moving image to perform her ideas and discourse on the myriad issues of race, knowledge, power and postcoloniality.

REPORT BY BETI ELLERSON (Updated May 2020)

Articles on women in cinema, visual media and screen culture in Lusophone Africa
from the African Women in Cinema Blog

International Colloquium and Film Screenings: Women's Struggles in the Cinema of Africa and the Middle East, 12-13 May 2016, CEAUP, Porto, Portugal
https://africanwomenincinema.blogspot.com/2016/05/international-colloquium-and-film.html