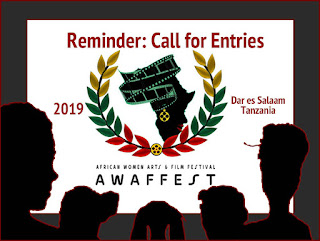 African Women Arts & Film Festival (AWAFFEST) is a platform to appreciate arts and stories of African women; to celebrate female film practitioners; and to empower aspiring artists. AWAFFEST is held in March to celebrate the International Women’s Month.

Film should be either directed, produced, written, edited, or shot by a woman.

Artwork, fashion designs, poetry, and any form of art should be originated or made by a woman. Videos, photos, and descriptions or synopsis of these arts may be uploaded as submission.

Submission must come from a woman.

All entries must be received by the deadline of November 30th.

All photos and trailers provided by "submitter" may be used for any festival promotions.

All entrants certify that they have been given full rights to use any and all music in their films.

Jury Award winners will be selected by a panel of active film industry professionals. All films go through a screening process and are reviewed by at least two members of the selection committee.

Winners agree to participate in the publicity for the Festival as well as other promotional events, including the website.

Email ThisBlogThis!Share to TwitterShare to FacebookShare to Pinterest
Labels: Call for entries, Tanzania