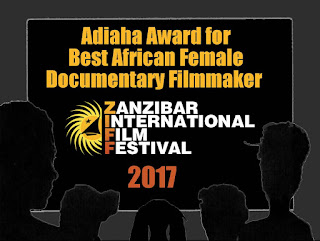 The Zanzibar International Film Festival is excited to announce a new special jury award category open specifically to women documentary filmmakers from Africa. The Adiaha Award for Best African Female Documentary Filmmaker will be offered for the first time at the 20th edition of ZIFF, taking place from 8-16 July 2017.

Adiaha means first daughter in the Ibibio language of Akwa Ibom State in Nigeria, not only will the winner be the 1st daughter of African Documentary Filmmaking, but she will also go home with USD2000 cash, a prestigious Adiaha Statue, and a certificate of award.

The award has been created and sponsored by Edima Otuokon of OMESS (Nigeria) and Lara Preston of Red Flag (South Africa), both entrepreneurial women who have been involved in the film industry for many years and are also actively involved in ZIFF. Recognising a gap within the awards at the festival, Edima and Lara aim to raise the profile on documentary filmmaking on the continent, and more specifically to ensure that more female filmmakers all over Africa get involved in the development of documentaries.

In this the 20th anniversary edition of ZIFF, it is hoped that more female filmmakers than ever will submit films into general competition, as well as in this special category.

Deadline for submission is 15 March 2017

For all submission and related criteria and information please visit http://www.ziff.or.tz/ziff-2017-film-submission/ and to stay up to date with all the ZIFF news, follow the ZIFF Facebook page: https://www.facebook.com/ZanzibarInternationalFilmFestival/

Mail submissions and accompanying materials (by Tanzanian filmmakers) can be sent to:

Email ThisBlogThis!Share to TwitterShare to FacebookShare to Pinterest
Labels: ZIFF