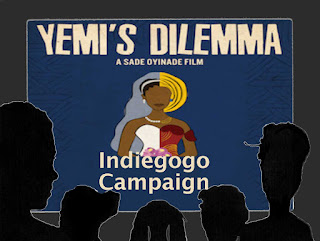 Synopsis:
Yemi’s Dilemma is the story of three sisters, a wedding and a family torn apart because of it.  The sisters are first generation Nigerian-American.  The eldest, Yemi, is expected to marry a Nigerian man, but she's keeping a huge secret from her traditional Nigerian parents that will forever change the dynamic within the family for better and for worse.

About the Director & Producer:
Writer/Director/Producer: Sade Oyinade is the Senior Producer on the award-winning TV One shows “Unsung” and “Unsung Hollywood” - both series that celebrate African American artists, music and movies. She directed the short Who Do You Know?, a film about HIV in the black community.  It received positive reviews in Arts & Understanding  magazine, became a featured selection of the 2013 Pan African Film Festival and was featured on ASPiRE TV on "ABFF Independent" in August of 2015.  Sade is also currently working on a feature film adaptation of “Better Than I Know Myself”, by Virginia DeBerry and Donna Grant.

Visit the Indiegogo page: Yemi's Dilemma for details about the crowdfunding efforts and to make a contribution.

"Upcoming Short Film Explores What It Means To Be A First Generation Nigerian-American" (Blavity) by Tyler Young
Posted by Beti Ellerson at 23:54