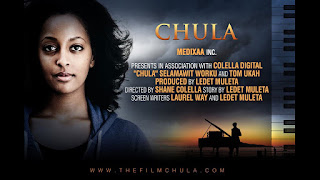 Ledet Muleta is a psychiatric nurse who has worked for over a decade in the Washington D.C. metropolitan area. She had this to say about her interest in making the film Chula:

After traveling to a number of African countries where I witnessed the burden of mental illness, I could no longer ignore the disparities that exist in both the African diaspora and the continent regarding mental illness. I decided that it was important to create something to address the ways that mental illness is stigmatized in our community and in doing so, empower those affected, provide awareness, and strive towards better solutions.  This manifested itself in the film, Chula. (Source: Kickstarter.com page)

Film Synopsis
Chula is a drama about a young African woman living with bipolar disorder in the Washington D.C. area, played by Ethiopian-American actress Selamawit Worku. The film touches upon her upbringing and subsequent rise to fame which is tainted by her mental illness and a strict father; One whose inability to distinguish between discipline and emotional abuse leaves scars that follow Chula into adulthood. To cope with the stress of her illness and rising fame, Chula begins to abuse drugs and alcohol. Chula's relationships, including her relationship with her boyfriend (played by Nigerian actor Obum Ezekwem) suffers, culminating in Chula losing all that she values most; yet in the end, a glimmer of hope is found.

Visit the Kickstarter page [https://www.kickstarter.com/projects/chula/chula-a-film-that-addresses-mental-illness-in-afri]: Chula for details about the fundraising efforts and to make a contribution.