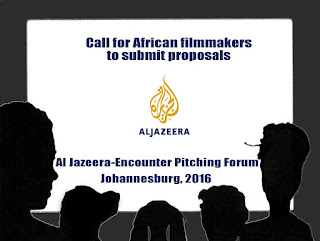 The Encounters South African International Documentary Festival, in partnership with Al Jazeera, is calling African filmmakers to submit proposals for the Al Jazeera-Encounters Pitching Forum taking place in Johannesburg on Saturday, 11 June 2016. The deadline is this Friday, 27 May 2016.

A maximum of 12 African filmmakers will be selected to pitch to Aloke Devichand, a senior commissioning producer in the documentaries department at Al Jazeera English.

Devichand focuses on the channel’s flagship character-led strand, Witness. Before this he helped launch a short docs strand for Al Jazeera’s digital startup, AJ+, which has become one of the world’s largest social media video publishers. Previously Aloke worked for CNN International, and for production companies making films for the BBC and Channel 4. He holds a BSc in Management from the London School of Economics and an MSc in International Public Policy from University College London.

The call is open to projects at any stage of development or production. Each selected filmmaker will have a maximum of seven minutes to pitch their film, with an additional seven minutes allocated for feedback and questions from Devichand.

Projection equipment will be provided for those that have DVDs or other visual presentations to augment their pitch. Selected applicants who cannot attend will be able to participate via Skype.

The pitching forum has been highly successful in creating opportunities for filmmakers. Last year Al Jazeera commissioned two one-hour documentaries from projects at the forum.

Submission Details
Interested parties should send not more than:
- A one-page synopsis of their film
- A one-page biography of the filmmaker and producer, including complete contact details (Skype contact, telephone number, city of residence, home and work addresses)
- One page of further background information and/or visual treatment of the subject.
- Links to previous works and promo of proposal, if available.
- Any submissions that do not follow the strict page limitations will be disqualified.

Email this to pa@encounters.co.za with Al Jazeera Pitching Forum in the subject line.
Submission deadline: On or before 4pm (South African time), this Friday, 27 May 2016.

About Pitching To Witness
Witness is an immersive, character-led strand on Al Jazeera English with a focus on observational, visual storytelling.

The strand has one-hour and half-hour slots each week. The former are usually acquired or co-productions, while the latter are normally commissioned projects.

Witness looks for the following elements in their half-hour commissions:
- A strong central character/s who ‘owns’ the film and tells their own story
- A specific journey that the character/s are on with the potential to capture an unfolding narrative, compelling storylines and a sense of transformation
- Actuality-driven narrative style with well-shot observational scenes and confidently crafted sequences
- Few or no formal sit-down interviews. We prefer ‘in-situation’ interviews filmed while characters are immersed in the events driving the film
- Films that are character-driven, rather than issue-driven, but still have a current affairs theme as a backdrop. We aim to provide depth and context to topical issues through the lived experiences of the characters
- Docs that have a timeless quality and therefore are usually not built around fast changing news events

See http://www.aljazeera.com/programmes/witness/  to gain a sense of the Al Jazeera Witness documentary style.

About Documentaries, Series & Stand-alone Films
- There are non-strand slots for series and stand-alone documentaries of half hour and hour durations which are commissioned, acquired or co-produced. These documentaries should be by, about and from a range of people, places and perspectives, challenge dominant views and seek to reflect the human experiences and stories behind current affairs in our docs.

About Al Jazeera
Al Jazeera English is an international news channel, with over sixty bureaux spanning six different continents. Established in 2006, it has continued to grow in reach and popularity due to its global coverage, especially from under-reported regions. The channel currently broadcasts to over 250m households across 130 countries. Its in-depth approach to journalism has won numerous awards and plaudits over the years, including RTS News Channel of the Year 2012, Freesat Best News Channel, the Columbia Journalism Award, a DuPont award, and a George Polk award.