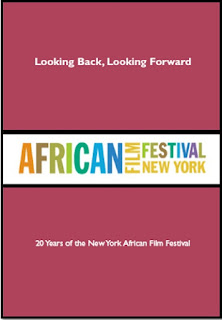 FROM THE BACK COVER:

To commemorate twenty years of the New York African Film Festival, over thirty of the continent’s most vibrant cinematic voices reflect upon the reasons that led them to dedicate their lives to filmmaking and the new challenges and opportunities for African cinema in the future. The filmmakers’ words reveal their own unique experiences and help us discover the richness and singularity of Africa’s cinematic history, illuminating new trends in contemporary African cinema and emphasizing the role of the African filmmaker as a cultural and political mediator in our highly interconnected world.

The directors’ insights are accompanied by detailed biographies and filmographies, as well as in-depth essays by filmmakers Férid Boughedir, Osvalde Lewat, and Femi Odugbemi, and renowned film programmer Richard Peña. The publication also has been honored with a statement from distinguished filmmaker Abderrahmane Sissako. Together, they create an intergenerational audiovisual map of the continent.

As has been our goal throughout the two decades of the New York African Film Festival,  we are giving a privileged space to the newest voices from the continent and the diaspora to celebrate more than fifty years of African cinema while continuing to look toward the future.

With the support of The Andy Warhol Foundation for the Visual Arts, we are proud to present this unique complement to the two volumes of our landmark anthology series Through African Eyes.