Prudence Maïdou, French actress, choreographer, and dancer of Central African Republic origin, interprets Salla, the protagonist of Dakar Trottoirs by Hubert Laba Ndao (Senegal). Her first role in a feature fiction earned her the Best Actress Award at the African Film Festival of Khouribga (Morocco) in June 2014. Prudence Maïdou plays the role of Sweet Thing in the series Les veuves Noires, “The Black Widows”, developed and produced by Ivorian Alex Ogou, alongside BAMS (Saffronia), Mata Gabin (Peaches), Tella Kpomahou (Aunt Sara), Jean-Michel MARTIAL (Pastor Jonah). She was on set for the shooting of the pilot of the TV series (Blue Palace) in Marrakech, Morocco in the summer of 2014, under the direction of Kamal Kamal, with Isaline Ponroy, Bernard Farcy, Eriq Ebouaney, Bruno Henry, Paco Perez.

Interview with one of the rising stars of cinema.

Djia Mambu: After Dialemi by Nadine Otsobogo (Bronze Stallion, 2013 FESPACO, Best Short Film at the African AMAA 2013) here you are starring in a Senegalese thriller. This confirms that cinema has become definitively part of your artistic career.

Prudence Maïdou: As an actress in France, it is not easy to find roles on that level. There are very few for black people, much less for black women. So when I read the script, I just wanted to tell myself that it is I who will play this role. I even had the nerve to call the casting director and say, "No matter who you call in France, no one can play this role better than me!" (Laughter). They took me at my word, they had me come for a tryout and hurled at me: "We will go with you!". Yes, it was a bit risky, my portfolio was not very extensive, just a few television appearances, dance performances, etc.

Djia Mambu: How does one get involved in such a project that is shot entirely in a foreign country and in a 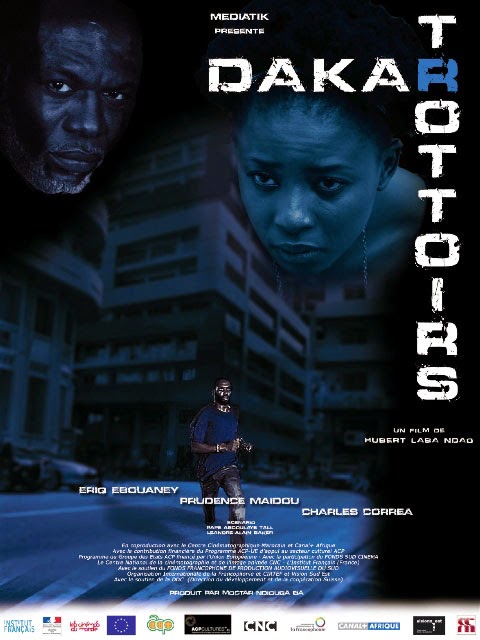 Prudence Maïdou: I came with a group that had been already working together for two years; because at the beginning, the crew had recruited young actors for training. I had joined the project, following a reading in Paris, during a trip by the producer Moctar Ndiouga Bâ,

Fortunately, I know Senegal, it is my adopted country that I am very fond of. Arriving there, I said to Charles Correa, who plays Siirou, although I do not understand, it would be nice to talk to me in Wolof. I asked him to take me around Dakar to better immerse myself, so we spent a lot of time together.

Djia Mambu: Salla is your first major film role, how did you get into the character?

Prudence Maïdou: I had no choice but to totally immerse myself into the character. But there is a part of me that I recognized in Salla. I was born in Africa [Central African Republic], I come from a humble background. I had the experience of seeing young people in the street into drugs and alcohol. I had these images ingrained in my mind. It helped me a great deal in working on my character.

Djia Mambu: She is a strong and complex character, a young black woman who takes the lead in her relationship and her gang. It is she who assumes the central role, rather unusual, no?

Prudence Maïdou: Salla constantly seeks her freedom. No matter what, she knows she will find a way out. As a child she was given a gold ring that she keeps around her neck, that is visible throughout the film. It is her hope, she knows that she will become someone. Even though she hangs out in the street, one sees that she will not end up there. Though at the moment she is in her squat with her gang, it is because she has no choice.

She grew up with Siirou who introduces her to this grandmother who raises most of these street youth. For Siirou it is clear that Salla will become his wife. But she dreams of another life, living in a big house, owning a Mercedes, with a chauffeur. And she arrives at the moment when she can no longer continue with Siirou and wants to fly with her own wings. Which Siirou cannot understand...