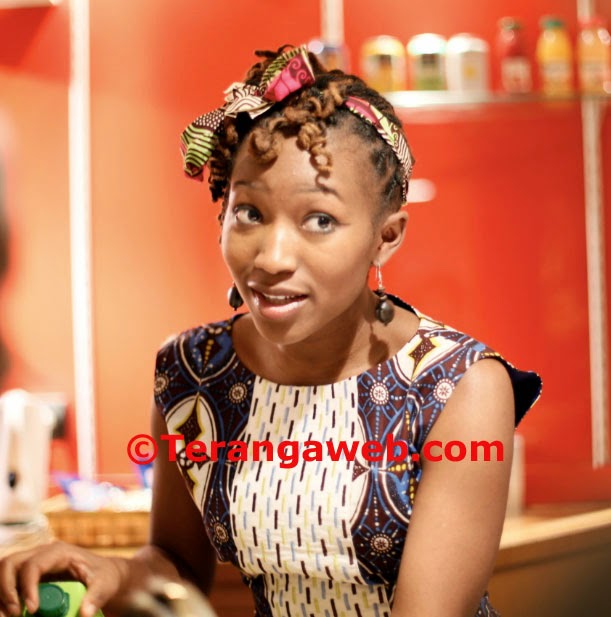 Fiction-Mirror-Reality and vice versa: The case of Nollywood, an Interview with Shari Hammond by GAYLOR LUKANGA FEZA, 6 August 2014 for TERENGAWEB.COM. Photo: Terengaweb.com. Translation from French by Beti Ellerson.

Shari, our Ghanaian-Ugandan sister who for professional reasons lives between her two countries, once settled in, took the time to dedicate a few moments. I borrow a few words from this polyglotte from the languages ​​she speaks perfectly to wish you mukulike (Luganda) tusemerirwe kukulora (lutooro) akwaaba (twi and ga), wilkommen (German), bienvenue (French), welcome to an experience - that of an African woman, educated, professional, world traveller, intelligent, as I was told by an honorary ambassador speaking of her: welcome to a reality that is not fiction.

For the record, this is the continuation of my article released Sunday, 6 July. An article in which I talked with you via an interview with Serge Noukoue, during the second edition of the Nollywood Week Festival that took place from 5-8 June at the Parisian cinema l'Arlequin.

This event was an opportunity to “tie myself in knots”, in the words of another friend, wanting to analyse the interpenetration between fiction and reality. While waiting to share with you my deep thoughts, please find in the following paragraphs my e-interview with Shari Hammond, in charge of partnerships for the association Okada Media, which organizes the Nollywood Week Festival.

Gaylord Lukanga Feza: Shari, what is your background? Your story? Your relationship with the creative industries?

Shari Hammond: I studied international law with a focus on Africa. I have always liked to gain knowledge through reading, going to exhibitions and discovering different artists. I was very curious about the different African art scenes so I became involved with the online journal of contemporary African art, Afrikadaa. Later in 2011, I met Serge and the other co-founders of Nollywood Week.

Recently, I've been able to work with “Writivism”, a literary arts festival in Uganda.

For me, to promote, stimulate and develop African creative industries, whether visual arts, publishing or cinema, is a necessity, because it contributes to the cultural pantheon and to the country’s economic growth.

GLF: Has your training been useful in your present activities?

SH: My legal training has given me discipline and organization in my activities, for instance, it is easier for me to read and write partnership and other contracts. Or, still, to study the various options and to ensure legal action.

GLF: What advice can you give to those who would like to work in the creative industries, and to avoid certain pitfalls?

SH: I would say that one must dare to roll up her sleeves and get to the task as soon as she has a vision of what she wants to accomplish. Having an idea is good, but a vision is better. The vision is the road map that will allow any cultural entrepreneur to avoid faltering in times of trouble, which exist in any business. This kind of industry unfortunately suffers from a lack of funding and it is even more difficult in Africa. One must connect with the right people: those who believe in your project and are ready to invest in it morally and financially.

GLF: How do you choose your partners? I am thinking of Total who supported this event, and l'Arlequin who again opened its door.

SH: We like to work with people who offer quality products and services to an African audience or who do outreach to Africa. People who are aware of the potential and evolution, as well as the developments taking place on the continent. The people, the supporters who promote this Africa.

We are not restrictive in our collaborations. We want to encourage long-term relationships with establishments that have proven themselves and that do not compromise on quality and that respect their clients.

Our meeting with Total was organised by our partners, the France-Nigeria Association in 2013. Since then, we have been engaged in many discussions in order to better understand our mutual values ​​and visions. The Total Foundation has decided to support us again this year because of our contribution to intercultural dialogue and because we create innovative access to new audiences.

The Cinéma l’Arlequin, an emblematic space in the heart of Paris, gave us an opportunity with the first edition and we gain their confidence after this first success. Their support throughout the preparation to the culmination of the Festival was very important to us and we continue to thank them for it.

GLF: How will the proceeds of the festival be used?

SH: One thing to note is that festivals of this magnitude have not yet turned over a profit. The little money raised will be used for the preparation of the next edition and the related activities of Okada Media, the association that organises the Festival.

GLF: During my attendance at the Saturday event of the Festival, I could feel the enthusiasm of the public. Many were those who came only to find “session sold out”, even for the following day. For those who were unable to attend the festival or to gain access to the different sessions, will they be able to view these films?

SH: In fact, like most festivals, it is best to clearly identify the screenings that one wants to attend and get the tickets as soon as possible. Many sessions were sold out and we are delighted. This festival was able to offer premieres for films that are inaccessible in France, and the audience who was present gave testimony of their interest and desire to see more films from the Nigerian industry.

Our greatest wish, as well as those of the directors and producers who were present at the festival, is to have these films available on as many platforms as possible. Partners such as Canal+ and TV Nollywood envision the acquisition of rights to broadcast some of these films. We shall wait and see.

GLF: If you were to change anything for this edition 2014, what would it be?

SH: Tough question! The challenges are only there to make us grow and to learn from it. I would emphasise perhaps more communication, especially to encourage filmgoers to get their tickets even before the Festival or the “Early Bird” specials, as we have already done.

GLF: Can one already make a rendezvous for next year?

Yes, you may now sign on for next year with, hopefully, more films that will move you, and more meetings with the makers of Nollywood.

GLF: Through its technique and means of distribution, cinema provides us with images and sounds that depict a living picture, imitating or characterising reality. What do you think is the role of those who create these images?

SH: Cinema is aptly nicknamed the 7th art. Cinema is an art, it is there to sublimate, reveal, or portray or adapt a reality. The artist, in this case the director or producer, has the duty to follow her/his own ambition and vision, even if that art is a major vector of influences that we cannot ignore. And it is for this reason that there will always be more or less direct messages in the films. In my opinion, the role of the makers is not to achieve a specific task, but to do what they do with zest and enthusiasm, ultimately leaving their mark by continuing to inspire.

Interview by GAYLORD LUKANGA FEZA of the Congo, diploma in Accounting and Management for Terengaweb.com. 6 August 2014. Translation from French by Beti Ellerson.