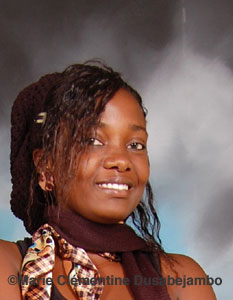 Clementine Dusabejambo's cinematic storytelling reveals a remarkable sensitivity toward the inner voice of the young protagonists of her films whose desire to express themselves is stifled by various external forces. The visualization of this quiet interior struggle is at the same time riveting and hopeful, revealing a deep empathy for others, especially young people often with little means to express their anxieties or concerns.

Her work is relevant and impactful, offering hope and vision to those whose stories are echoed in these works, but also provides a means to raise consciousness that these experiences do exist and have significant consequences for those who endure them.

The past is always present in the life of Lyiza who has to live with the traumatic memory of her parents’ murder, during the genocide in Rwanda. When she recognizes in the father of her classmate, Rwena, the person responsible for their murder, she says so publicly, creating great tension. But harmony returns through the intervention of a teacher who takes the youngsters to the museum of the genocide, the place of memory, and guides Lyiza towards forgiveness. Without being didactic and with an original narrative style, the film underlines the importance of sharing experiences and educating for truth and reconciliation.

The film speaks about a young girl who, on entering a private school, finds herself ridiculed by teachers and classmates due her lack of knowledge of either French or English. The girl, only proficient in her native tongue, turns to art as a form of expression and manages to reveal her troubles through drawings. Dusabejambo’s very moving film cleverly suggests that Africans need not be dependent on (post)colonial ideals of modernity in order to create a truly independent African future and culture, while also arguing for an agency, beyond the spoken word, of the image — much like the process of filmmaking itself. (Source: madamasr.com)

A Place for Myself relates the story of Elikia, a five year old girl with albinism, who attends an ordinary elementary school. Due to her skin color her classmates make her realize that her being ‘different’ is more a problem than a special trait. While the neighborhood treats her as a stereotype, her mother encourages her. Together, they fight back and raise their voice to find a place for themselves.

At some point, every child dreams of being a superhero, wearing a cape; imagining a power to make these dreams a reality. Along the way, self-confidence and faith are lost, when the world reveals that there is a difference between ones self-perception and that which is called "normality". A Place for Myself is a reflection on difference. The goal is to inspire young people and to make them realize that human beings have a lot in common to focus on rather than just differences.

A 12-year-old boy, who wants to join the neighborhood football team is bullied for his perceived effeminate manner.


Marie Clementine Dusabejambo, a young filmmaker from Rwanda has great hopes for the future of Rwandan cinema. She talks to us about her passion for filmmaking.

Marie Clementine, first tell us a bit about yourself.

I am Marie Clementine Dusabejambo, electronics and telecommunications engineer from Rwanda. I am 24 years old and a filmmaker by profession where I work with Rwandan-based Almond Tree Films.

I notice that there is a real transformation in cinema in Rwanda, which is in the process of affirming itself. What was your experience with the moving image while growing up?

When we were children we saw only foreign films, especially American or even Chinese films. But later even the neighboring countries such as Congo, Uganda among others, began to make their own films, which influenced Rwandan cinema. But I would say that cinema in Rwanda actually developed after the 1994 genocide when people began to write about their experiences regarding this period.

You are also an electronics and telecommunications engineer, how did you evolve into cinema?

While doing my studies, I was also involved in filmmaking. In fact, I acquired my knowledge of cinema on location while working on various film shoots, and I gained quite a bit of experience since I started four years ago.

Your first film, Lyiza recounts the story of a young student who discovers that the parents of one of his classmates were responsible for his family’s murder. Is the objective of the cinema of your generation of Rwandans to reconcile and rediscover an identity through filmmaking?

I would not say that this generation of Rwandans attempts to find its identity through cinema, but rather that the films act as a vehicle for this identity.

Cinema is a profession for us; and sometimes, a means for others to relax.

The transition from French to English, what role will it play?

In artistic terms, I do not think that it has changed things because in art there is a freedom linguistically speaking.

What contribution would you like to make towards the growth of cinema in Rwanda?

I would like for filmmaking to be a profession that is first of all accessible. I will make more films and eventually create a school to train others in cinema production. There are a lot of people who have the talent for filmmaking but who do not know how to develop it.

And as a woman in cinema…

My role is to make people aware, especially women, that as any other profession, women can make films. And that it is an incredibly remarkable experience that allows women to transmit their ideas and to better express themselves.

Interview with Marie Clementine Dusabejambo and translation from French by Beti Ellerson, January 2012.