Perspectives from Italy: María Coletti talks about her research on the representation of women in African cinema 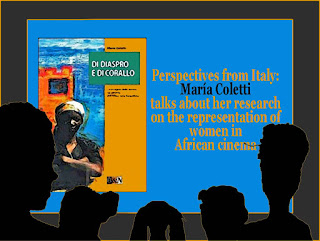 Italian film critic María Coletti discusses the reception of African cinema in Italy and her research on female representation in African films.

María, how did you choose the topic on representation of women in African cinema for your doctoral thesis?

The idea came to me at the very same moment that I first discovered African cinema. By the end of my university cinema studies I was tired of mainstream western cinema models and very touched by underground and independent filmmakers such as Jean Marie Straub and Daniele Huillet.

When I discovered African films, they seemed to me to be a wonderful synthesis of experimental and popular cinema. At the same time they appeared to offer a very different model of construction of the female character, in which the woman was not seen simply as an object, even if there were still very few women directors. I wanted to learn more about this and also to see women and cinema through the eyes of a different cultural context.

Could you talk a bit about your research and the approach of your study?

The central aim of the study was to analyze the construction of the female characters from a gendered perspective informed by feminist film theory and discourses on race, gender and difference, within a more classical narratological and sociopolitical analysis. The study of the construction of female characters in African films offers a great range of themes and levels of interpretation, especially when compared to African oral tradition and literature, on the one hand, and to African postcolonial history, on the other. Since its birth, African cinema has given particular importance to women as a symbol of the struggle of the entire continent in search for its freedom from colonialism and the re-appropriation of a lost or damaged identity.

In order to approach this subject effectively, I chose to work within a well-defined and homogeneous area of study. I thus concentrated my research on Sub-Saharan Francophone countries, where Black African cinema took its first steps, also considering the well-known French assimilationist cultural politics.

I focused in particular on a corpus of sixty films that consider female characters as their symbolic center, creating a sort of “petite histoire” of Sub-Saharan Francophone cinema, both diachronically and synchronically.  From an historical point of view these films mark diverse periods and trends, while from a narrative standpoint they reveal different ways of dealing with female characters, through recurrent themes and symbols. Contextualizing these texts in light of historical and social processes and of oral and literary heritage, has helped me to reveal the adherence to, or on the contrary, the opposition to traditional female archetypes.

The first chapter gives a panorama of female typologies both in the oral and literary tradition, with a particular emphasis on the “revolution” of women’s literature, in order to explore the different ways in which social and cultural imagery is reflected in the filmed image. In the second chapter, I examine the films looking through the three focal lenses of Voice, Body and Image. The third chapter focuses on the textual analysis of nine films, divided into three temporal groups from 1966 to 1999: Golden Years of Cooperation (1966-1975); Daring to Invent the Future (1976-1987); In the Tempest of Small Festivals (1988-1999).

The dissertation was published soon after in 2001...

The book, Di diaspro e di corallo. L'immagine della donna nel cinema dell'Africa nera francofona (Of Jasper and Coral: Images of Women in Black African Cinema is the published edition of my Ph.D. research at Roma Tre University, Rome, from 1998 to 2000. It includes an index and a list of the films that were analyzed.

You also co-authored the book Souleymane Cissé: Con Los Ojos De La Eternidad / Souleymane Cissé: With The Eyes Of Eternity with your husband, Leonardo De Franceschi, and devoted a chapter to the images of women in Cissé’s films entitled “Agua: Mujeres que se miran al espejo/Water: Women looking in the mirror.” I have always been interested in the representation of women in the films of Souleymane Cissé, so your work is of particular interest to me. Could you give some reflections on the chapter?

The central role of women in Cissé’s cinema can be attributed to an interest in the female character as shown by many other African directors who from the start of African cinema dealt with the female condition as part of the struggle between tradition and modernity and as a metaphor for neo-colonial power and reappropriation of cultural roots and dignity in the face of all kinds of oppression. But what makes Cissé’s cinema so significant regarding the image of woman is the continuity with which the director tackles the female character, who traverses all his films as a red thread, or, more appropriately, as a stream: a subterranean river which flows throughout his cinema, sometimes on the surface and at other times deep below, stretching between history and myth.

It is not by chance that the female characters in Cissé’s films are associated with the natural elements, as it mostly happens in oral tradition and in literature. Admiration for the female body is connected with the relationship perceived between woman and the forces of nature, her fertility with that of the earth. While natural landscape and trees often have an important role to play—as a refuge for the female character or as a direct link to the ancestral realm and to the supernatural—water is without doubt the most prevalent element when presenting female figures in his films.

Water is the element which refers to the female essence par excellence, associated in the collective imagery with the very idea of the source of life: amniotic fluid, blood (menstrual, too), mother’s milk. Another symbolic object which is often associated with water or milk is the calabash, a domestic utensil seen as a female and fertility symbol across the whole African continent, on three levels: cosmic (as an image of the world/earth), human (as a metaphoric surrogate of uterus and female sexuality) and cultural (cooking and nurturing).

In Dogon cosmogony Amma brings forth creation through Nommos, emanations of the godhead, conceived as a vital force which is both water and word and which is at the origin of all living beings. A similar figure is present in other cosmogonies to be found in Mali. In the Bambara oral tradition we find Faro, an androgynous divinity, master of water and word and creator of universe together with Pemba. In the Bambara conceptual universe, Pemba and Faro also represent the sky and the earth, two great spirits whose interaction brings forth both conservation and change. Pemba and Faro are therefore a dialectical couple who can symbolize being and becoming. Besides, Faro expresses the principle of duality and complementarity, central to the Bambara philosophy: as an androgynous being it embodies both the male and the female and thus allows the intimate association of differences.

It is once again not by chance that the paths followed by female characters in Cissé’s films can be read in the light of this original duality, as a quest for a positive complementarity with the male element. Tenin, the main character in Den muso, does not manage to find any balance with the male figures of her life: all her relationships end up being prejudiced by conflict, violence and separation. The two wives in Baara, even though they are different in character, social class and educational background, both show a complete detachment towards their husbands, expressed by the use of camera angles, with frequent high or low angle shots to underline power relationship. It is in Finye that the male and female characters discover their vital duality, their positive complementarity, through the eyes of Ba and Batrou, the young and rebel couple at the heart of the film. A mythical and timeless atmosphere fully unfolds in Yeelen, along the path followed by the main character, the male hero Nianankoro who nevertheless relies on the female element to carry out his own task of revolution and regeneration, thanks to his mother and then to his wife. Cissé immerses himself again in history with Waati, but within a spiral circularity which like a whirlpool constantly blends space and time, creating a more complex female character who turns duality into the very essence of her being. Nandi, the female heroine of the film, is a dual figure par excellence, in the sense that she expresses her quest for balance among opposing forces not only in her relationship with the male element but in all the most significant relationships which punctuate the path she is on: the symbiotic relationship with her grandmother, the shared life with her partner, the transfer of identity to her adoptive daughter, but also the different branches of knowledge represented by her university studies and the Rastafarian philosophy.

The central role of the female character in Cissé’s films can therefore be read as a journey of liberation and growth, from Den muso to Waati, via Finye, through the eyes of three heroines who differ in their force of transformation: Tenin, Batrou and Nandi. While the use of close-ups is present in all of his films, it is certainly mostly significant in the long sequence depicting the discussion of Nandi’s university graduation thesis: while she tackles the subject of the aesthetical value of the mask in African civilization, Cissé portrays her face, by shrouding her in an evocative chiaroscuro, as if she were a living mask.

In this respect, Cissé not only has placed the role of women and the importance of gender relationships at the very centre of his films, but he has also formulated a powerful equation between the female element, the African continent and cinema. Women in his films are able to look at themselves with courage in the mirror of life, of history. From Tenin’s petrified gaze at the end of Den muso to Nandi’s powerful gaze in Waati, which can turn anyone to stone: the female character has evolved from simply observing the world to transforming it. And the same can be said about the female voice: from the deadly silence shown by Tenin in Den muso to the vital power of the word spoken first by Batrou in Finye and then by Nandi in Waati.

Awareness—by Cissé, by his heroines—becomes the gift of synthesis and creation.

What has been the reception of your research in Italy?

I really don’t know, I cannot say there has been a real reception. There are very few academic works on African cinema and women studies, and even fewer networks of researchers on that theme as far as I know. I am no longer in the academy, it is very difficult in Italy, so I am a little out... "I walk alone". I do know that my work has been used in some courses on Third Cinema Films and Theories at the University of Rome-La Sapienza with Professor Giulia Fanara and in some courses on Postcolonial Film Studies at the University Roma Tre with my husband who is professor there, and who also directs the Panafricana Film Festival.

Interview by Beti Ellerson, May 2011.