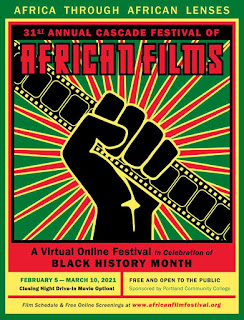 This year, the festival will be held virtually. Read the FAQs about watching films in the virtual format.
https://www.africanfilmfestival.org/festival/venues/

The Cascade Festival of African Films shows us Africa through the eyes of Africans, rather than a vision of Africa packaged for Western viewers. The films celebrate Africa’s achievements, expose its failures, and reveal possibilities for a hopeful future. Although the films cannot represent an entire continent, we hope to encourage American viewers to become interested in and study African cultures.