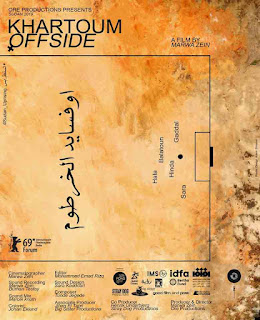 “What if your country is going through political, economical and social challenges, can women  dream big?  What if they are playing football?”

Among the protagonists of Marwa Zein's documentary, Sara is the one depicted with a remarkable entrepreneurial mind. And the group of young sporty women she belongs to is very much in need of business models to make their dream come true: putting together a Sudanese team for the FIFA Women’s World Cup. But besides lack of finances, there are quite a lot of other obstacles to overcome. Oufsaiyed Elkhortoum explores this feminist universe on the outskirts of Sudan's capital, where jokes are cracked as versatile as the ball is kicked into the goal. The young women, with and without veil play football, take their smartphones to bed: they are bond by street smarts and staggering energy which have brought them together as a sports team that doubles up as a collective survival strategy. Demonstrating considerable intimacy with these women, Oufsaiyed Elkhortoum reveals their daily lives in a city full of contradictions, showing how family traditions, politics and religion dare to dictate their life plans. Marwa Zein’s debut is at once cinematic proof of the power of female friendship and a Sudanese filmmaker’s concerted effort to rectify stereotypical perceptions of her country. Source: berlinale

After studying chemical engineering for 3 years at Cairo University, she decided to discontinue in order to pursue film directing at the High Institute of Cinema in Cairo. She graduated in 2009 with an honorable mention.

She has since worked as Assistant Director in Egypt / Lebanon with film directors such as Dawoud Abdelsayed , Hala Khalil, Khairy Beshara , Dr. Sherif Sabri and Shady El-Fakharany”.

“I believe that films are made to tell a story, give a feeling .. make you think or make you feel lost and maybe sometimes just to speak your confusion and dark sides ..”