Claudine Ndimbira : Support her film project “Living like a shadow” about the LGBTQ community in Rwanda 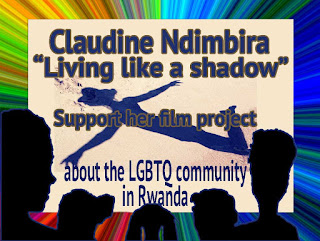 Claudine Ndimbira : Support her film project “Living like a shadow” about the LGBTQ community in Rwanda

Claudine Ndimbira had this to say about the film project:
With this project “Living like a shadow” I want to give the voice to LGBTQ community members in Rwanda to tell their stories, what they have been through, what they wish their lives could be but also to the society so that they say what is the reason why they think being gay is a problem to them.
Source: http://creativerwanda.com/interview-with-ndimbira-claudine-shenge/

Synopsis
“Living like a shadow” is a 90 minutes film that will follow the lives of 3 characters. Even if some have similar issues or experiences – like living a double love life due to what the society expects from them or being judged often, each one of them has a unique story.

Excerpt from Director’s Statement
I want to make this film to shed light on that issue so that it can start a conversation. People fear what they don’t understand or what they refuse to understand but at the end of the day the solution is to talk about it and react positively.

TO SUPPORT CLAUDINE NDIMBIRA'S "LIVING LIKE A SHADOW" FILM PROJECT GO TO: http://creativerwanda.com/living-like-a-shadow/
Posted by Beti Ellerson at 09:35