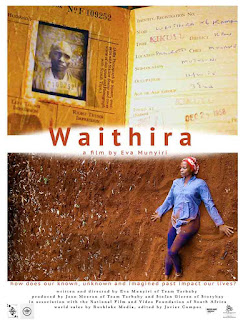 Synopsis
Eva Njoki Munyiri left her birth country, Kenya, aged 14 and has lived in 3 different continents since then, leaving her somewhat “rootless”.

Her journey to discover who her paternal grandmother, named Waithira, was leads her to Germany, Wales and Kenya where three women (her eldest sister and two cousins) named Waithira after their grandmother live.

The director weaves a tapestry of two generations of African women from the fragments of these three women’s lives as well as the recollections of her uncle Kamau an eighty-year old man who lives on the family’s traditional land in Kenya.

Waithira explores the director’s intimate history and its intersections with forgotten Kenyan history, pop culture and the diaspora. The film thus seeks to investigate how our known, unknown and imagined past impacts our lives.

Biography
Eva Munyiri is a Kenyan documentary filmmaker and producer based in Mexico City.
Her first feature Waithira was in competition at the Durban International Film Festival (2017), and selected to the Encounters Documentary Film Festival 2017. It is distributed by Rushlake Media.
Her short film Bankslave part of the web documentary Défense d’Afficher won the France24/RFI prize at the Visa pour l’Image Festival Perpignan in 2012 and was selected to dozens of international festivals, amongst them the Callegenera Festival de Expresiones Urbanas (Mexico 2013) and Mostra Caradura Festival Internacional de Film de Arte Urbana (Rio, Brazil).

Her short film Liquid shot in Madhya Pradesh, India has been used in the Basic Income debate in India and France. She has made two short films for ATD Fourth World on issues of extreme poverty in Tanzania.

Eva has worked as a researcher, producer and curator in South Africa, France and Mexico.
She collaborated with Chimurenga, a Pan African writing, art, and politics collective, to bring their radio station PASS (Pan African Space Station) to the Tamayo Museum one of Mexico City´s leading public contemporary art museums 2017.

She is currently in development for a feature documentary on the town of Cheran in the state of Michoacan, Mexico.
(Source: https://teamtarbaby.wordpress.com/132-2/)

Waithira - Trailer from Rushlake Media on Vimeo.
Posted by Beti Ellerson at 16:43