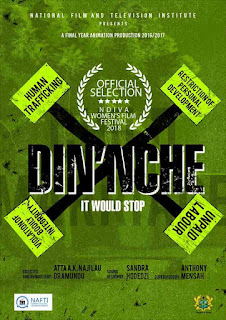 Synopsis
Zak, a JHS teacher living in Sokamya is motivated by his desire to save a younger friend Pagnaa, 15 from a marriage to Alhaji Mununi, 72. By following a phone number on a newspaper Zak finally gets help to not only save Pagnaa but spark a campaign against the practice of child marriage in his community.

Director’s profile
Najilau Dramundu had this to say about her work: ““I’m obsessed with the idea of being able to manipulate events in your own way…Animation is fascinating…it’s like you’re God, you can create whatever you want whenever you want.”

Dramundu wants to do more than preserve Ghanaian culture with her work. She hopes to address body image issues that are being exasperated by social media and are affecting the younger generation in her hometown, Tamale, in the northern part of the country.